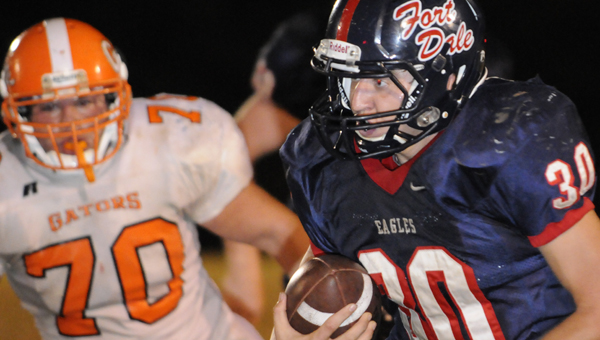 Despite fighting until the end, the Eagles couldn’t pull away with a victory against Clarke Prep Friday night.
A second-half rally for Fort Dale made the score respectable, with the Eagles falling 36-28.
The Eagles didn’t come out with much force in the first half, getting called on a penalty on the very first play from scrimmage.
“We dug ourselves a big hole to start with,” said Coach James “Speed” Sampley. “We didn’t play well the first half or the start of the third quarter.”
The Eagles forced Clarke to cough it up on their first possession, but they were forced to punt it right back. The Gators capitalized with a two-point conversion to jump out to an 8-point lead.
Both teams kept silent the rest of the first quarter, but a pass interference call put Fort Dale in prime position to score at the top of the second. Perry Singleton picked up 16 yards on a big play, but a few missed opportunities later, the Eagles were sitting on fourth down. The Fort Dale field goal attempt was no good.
Two plays and 81 yards later Clarke increased its lead by another touchdown, once again converting the two-point play for 16-0 lead.
Singleton ripped off a big return to get the next drive going, running 40 yards to give the Eagles the start on their own 44. Manny Norrell picked moved the chains on plays of 22 and 4 yards to keep the drive alive. A 19-yard pass found the hands of Stephen Till to get the Eagles on the board. The two-point conversion was no good.
Clarke scored another 8 with 2:53 left in the half, but it was just enough time for the Eagles to add a few points to their score. With 56 seconds left in the half, Hunter Armstrong found Mason Stinson to bring the Eagles within striking distance. Armstrong tossed it up to Brandon Matthews, and then ran in the two-point conversion to go into halftime behind, 14-24.
As Sampley described, the first few minutes of the third were disastrous for the Eagles. Two quick touchdowns by Clarke put the Eagles behind 36-14, as both two-point conversion attempts by the Gators failed.
Things, however, slowly got better for Fort Dale. Armstrong took a quarterback keeper for a 1-yard gain and the touchdown, bringing the tally to 36-20.
The Eagles got the ball back after the end of the third quarter. A time consuming possession paid off when Norrell ran in a touchdown, followed by a pass to Till for the two-point conversion. Fort Dale still trailed, 36-28.
Momentum seemed to be shifting towards the home team, when a big defensive stop forced the Gators to turnover on downs. The Eagles got the ball back on their own 28, and began a steady push for the endzone. With 1:31 left, Fort Dale failed to convert a 4th and 20, and Clarke ran down the clock to end the game.
“I’m proud that our kids fought back, but ultimately we want to win, not just fight back,” Sampley said. “We’ve got to get better at everything we do and improve the next two games if we are going to be ready for playoffs.”
Armstrong had a prolific passing night, going 22 for 37 for 313 yards and 2 touchdowns. Till led the pack with 8 catches for 111 yards. Norrell grabbed two of his own for 75, and Brandon Matthews picked up 57 yards on 5 receptions.
The Eagles rushed for 101 yards and piled up 414 yards of total offense.
Till and Matthews led Fort Dale Academy in tackles with 11 each.