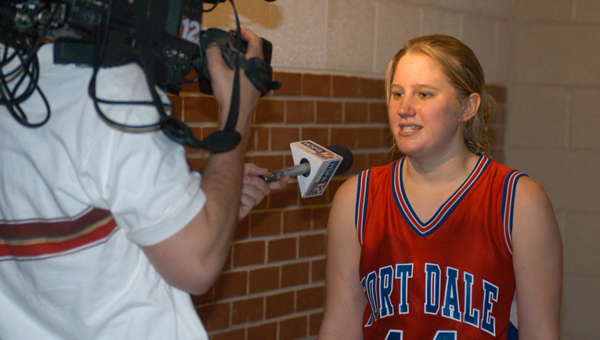 Laura Skipper will be one of two inducted this Friday. Here she is shown being interviewed by a television crew following a game. (Advocate Photo/File)

Two members of the Fort Dale family will return this Friday to be honored in the Hall of Fame.

“There are just so many things you could say about these people,” said headmaster David Brantley. “They are the kind of people that have represented us in such a great way, both athletically and academically.”

Till said he was happy to hear a familiar voice last Monday when he heard he’d been named to the Hall of Fame.

“Coach Speed, who was such a big influence on my life, called me and gave me the good news,” Till said. “It meant a lot to me to hear it from him.”

Of all the high school memories, Till said he recalls a lot, especially one game versus Mobile Christian.

“We went into overtime, and they scored first scoring 6, plus the extra point,” Till said. “We came out the very next play and scored a touchdown, and then went for two for the win.”

Skipper says she missed being able to play.

Skipper grew up playing tennis, starting at age 6. Her relationship with coach Johnny Mack Brown, she said, sometimes was more of a friendship than a coach and player one.

“He was so passionate about what he did,” Skipper said. “He really put a lot of time into his players.”

Skipper said she grew up playing junior varsity basketball and looking forward to the day she would play for coach Reggie Mantooth.

“It was definitely a big change going to varsity,” Skipper said. “It was a lot tougher, but he made me a better player.”

The two will join a long list of athletes and scholars that came before them, said Brantley.

“We are so proud of their association with this school and all the accomplishments they made while they were here,” Brantley said.