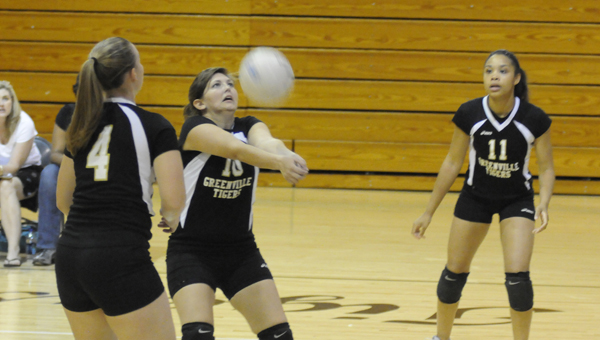 Hollie Halford, #10, who is seen here taking the force out of a Selma spike, grabbed 7 aces for the night. Cortnee Myers, #4, and Raquel Williams, #11, both stand nearby waiting to set the ball. (Advocate Photo/Austin Nelson)

The Greenville Tiger volleyball team will be advancing to the regional tournament this Saturday after defeating Selma for the area championship Tuesday.

“I am very excited we won,” said coach Morgan Cook. “This is only the third year that we have had a team, so to make the regional tournament is pretty impressive.”

Coach Cook said she has grown up with these seniors since they were sophomores.

Greenville had no trouble downing Selma in the first two games, grabbing the lead in both games and refusing to let go of it. The first game ended 25-19, Greenville, with the second game score ending similarly at 25-20.

Game three, however, gave the Tigers a little of trouble. They started off strong, rising to an early 5-0 lead. They were able to increase this to 18-8, but this was when Selma made a bit of a comeback. Selma pushed back to tie the game 23-23, and then grabbed the lead 23-24. The Tigers answered, going on a 3-point run to win the game, 26-24.

Raquel Williams lead the Tigers with 12 aces, followed by Celeste Clark and Hollie Halford with 7 a piece. Clark claimed the most digs in the game with 14, followed by 10 from Cortnee Myers.

The Tigers will play this Saturday at 10 a.m., but the location is yet to be determined.

“Volleyball isn’t that big around here,” said Cook. “Maybe this can help start getting the students involved and getting more people to know and love the sport.”