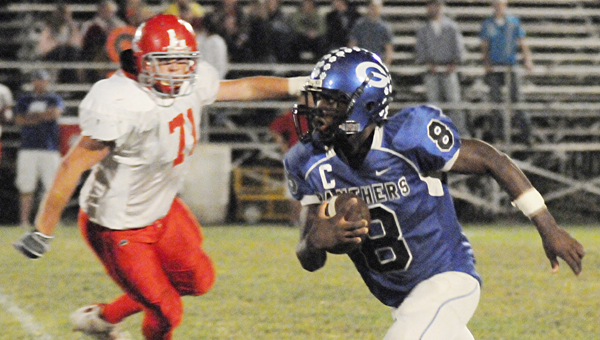 Rickey Everett stepped up to the role of quarterback Friday, in the absence of Devin Bonner. Everett threw 1 for 3, for 29 yards and one touchdown.

The Georgiana Panthers looked better than they have all season Friday despite a change in coaching staff and having some key players injured.

The effort, however, was not enough to defeat the visiting Eagles, even though the Panthers scored more touchdowns. The final score ended with Pleasant Home ahead by two, GHS 36 – PHS 38.

Athletic director Kirk Norris had nothing but positive things to say about the team.

“When we got down two scores in the fourth, when the kids could have just quit, but they didn’t,” Norris said. “The biggest thing we take away from this game is that our players had more heart than I have seen at this school in years, even with all that has happened this week.”

Rickey Everett, who played quarterback because starter Devin Bonner was out with an injury, aired it up on the first drive, finding Dexter Smith for the touchdown. The Panthers failed to convert for two, but took the early lead 6-0.

Pleasant Home ran back a long return off the kick to put them in prime position for their first drive. The Eagles pushed it in to tie, 6-6, and also failed to convert the two-after.

The Panthers were forced to punt, and the Eagles made the best of their offensive possession, adding a touchdown and two-point conversion to grab the lead, 6-14.

Georgiana coughed up the ball, giving Pleasant Home possession again, but a strong Panther defense forced a turnover on downs. A combination of rushes from Rickey Everett and De’Kendre Binion brought the Panthers close enough for Everett to run it in 2-yards on a quarterback keeper. Georgiana again failed to convert, a trend that would come back to bite them later in the game. The teams went into half with Georgiana trailing, 12-14.

The Eagles came out with a vengeance from halftime, as no one could seem to stop #13 Frank Senn. Senn picked up the touchdown and the Eagles converted for two to increase their lead to 12-22.

Momentum started shifting towards the Panthers when an onside kick backfired, allowing Matthew Colvin to return the ball almost to the endzone. Everett ran it in to make the score 18-22.

The Panthers got the ball back and in one played, Binion ran for 90 yards and the touchdown. The two-point conversion was no good, bringing the score to 24-30.

Eagles answered again with a run to increase their lead to 24-38.

With time winding down, Binion ran it in to bring the score to 30-38 with 5:40 left in the game. The Panther’s recovered the onside kick, and then Ethan Hartley scored his first touchdown of the season to bring the score to 36-38. The crucial two-point conversion failed, and Pleasant Home kept the ball the rest of the game, ending the game by taking a knee.

Binion led in rushing yards, with 21 carries for 210. Ethan Hartley picked up 63 on two carries. Everett was 1 for 3 passing, totaling 29 yards and 1 touchdown.