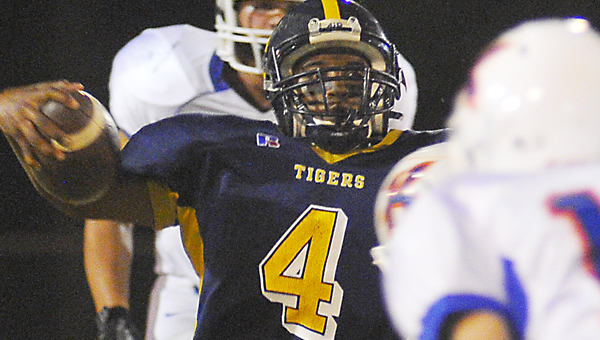 McKenzie’s Ladarius Grace looks for running room against Kinston on Friday night. The Tigers improved to 7-0 with the 38-6 win.

It took one quarter, but sixth-ranked McKenzie woke up on offense to score three touchdowns before halftime and down upstart Kinston 38-6 for homecoming Friday night.

“It’s the reason I’m not a big fan of homecoming,” said McKenzie head coach Miles Brown, whose team is now 7-0 on the season.

The Tigers took the opening kickoff, failed to move the ball, and bobbled a snap on the punt, allowing Kinston a golden opportunity to cash in on the miscue at the McKenzie 15-yard line. The Tigers’ defense, though, rose to the occasion and a 36-yard field goal attempt was short.

Still, McKenzie’s offense wasn’t clicking. Kinston got the ball back following another punt and strung together a series of first downs.

Offensively, the Bulldogs stacked the backfield and ran.

“That’s what they came in wanting to do…run the ball, work the clock and limit our possessions on offense,” said Brown.

And the Bulldogs were doing it well early, driving to the Tigers’ 32-yard line early in the second quarter.

Kinston then attempted its first pass on the drive. And it was a bad one, a deep bomb that the Tigers’ Emmanuel Johnson caught inside the endzone and returned the ball back upfield.

“Emmanuel just made a great play on the ball,” said Brown. “Then, our guys did a good job of peeling back and blocking for him.”

From there, it took one play for quarterback Sir Wallace Presley to find a streaking Cliff Pugh for a 66-yard touchdown catch and run. The Tigers got the ball back after a punt and Wallace and Ladarius Grace moved the offense to the three-yard line where Johnson ran it in for the score.

An onside kick followed and Presley added a five-yard touchdown with 36 seconds left before halftime.

The Tigers’ offense might have struggled in the first quarter, but started the third quarter on fire. Johnson took a handoff and outraced the Kinston defense down the sideline for a 41-yard touchdown run.

Chuck Thompson added another score – a seven-yard touchdown run with 3:38 left in the third – and the Tigers led 32-0.

McKenzie surrendered a fourth quarter score to the Bulldogs, but Pugh answered with a 10-yard touchdown run of his own.

“I was proud of the way we made adjustments to what they were doing and was able to score on offense,” said Brown. “The defense played a heck of a game too.”