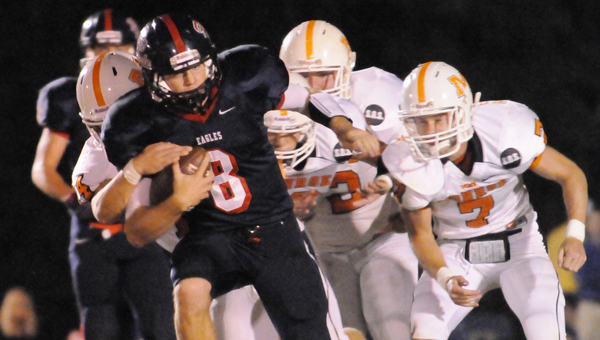 Coach James “Speed” Sampley said there “wont be any secrets out on the field” this week, as Fort Dale go on the road to face Pike Liberal and two former members of the Fort Dale coaching staff.

Coach Steven Kilcrease and William Johnson both worked as coaches for the Eagles, Sampley said, and will know a lot about how Fort Dale plays football.

“I think we know a lot about what they do, too,” Sampley said. “It’s going to be a matter of who comes out and gets the job done.”

Sampley said the two-time defending champions have been dabbling in a spread offense, but are really a power team no matter what they run.

“They want to run down the clock, and keep the ball away from you,” Sampley said. “It’s a good strategy. They have won the last two state championships with it.”

The Eagles narrowly defeated Pike Liberal last year 28-20, Sampley said, but it is going to take a stronger effort this year.

“We won last year and only snapped the ball 32 times on offense-that doesn’t leave you much room for error,” Sampley said. “We are going to have to play good defense so we can get the ball back and give our offense as many snaps and scoring opportunities as we can.”

As for last Friday’s game versus Monroe, Sampley said he had no excuse for the loss.

“Monroe has a really good football team, and they were better than us last Friday night,” Sampley said. “We want to get a chance to play them again, but that will have to be at the state championship. So that’s what we have to do.”