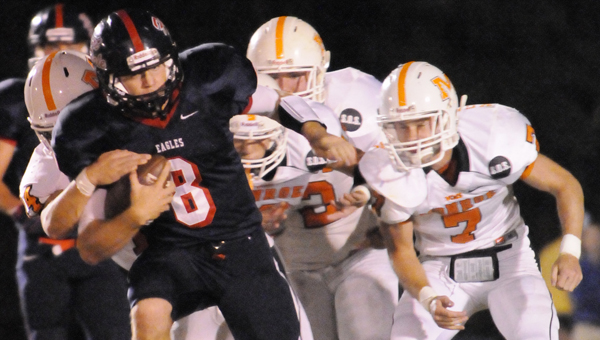 The Volunteers led 20-0 after two quarters and added to their lead in the second half, building a 33-0 advantage before the Eagles could score. Manny Norrell punched it  in from inside the Monroe Academy 10-yard line with two minutes remaining in the third quarter.

“They’re an excellent football team,” said Sampley. “They’ve got a lot a team speed and if you make mistakes on defense they can hurt you.”

The Volunteers (6-0, 3-0) avenged a 14-6 loss to Fort Dale (5-1, 4-1) last season in Monroeville and handed the Eagles their first region loss. Monroe, defending AA state champions, moved up to AAA this year.

The Eagles’ primary goal on Monday is to regroup, said Sampley.

“We know they’re a good football team but we also know we didn’t play as well as we could have played,” he said. “One loss doesn’t kill your season.”

But while Vermilyea and the Vols were rolling up touchdowns, FDA starters were being knocked from the game. Starting center Chance Williams, fullback Brandon Matthews, and quarterback Hunter Armstrong all left the game with injuries.

Armstrong rushed for 84 yards and passed for 132, but hurt his non-throwing hand and gave way to back-up Ryan Taylor.

The Eagles have been bit by the injury bug seemingly all year.

“We’re not going to make any excuses,” said Sampley. “If someone’s hurt someone else is just going to have to get in there and play.”

FDA heads to Troy to play Pike Liberal Arts in another key region game for both teams.