Tigers take it to Wilcox-Central 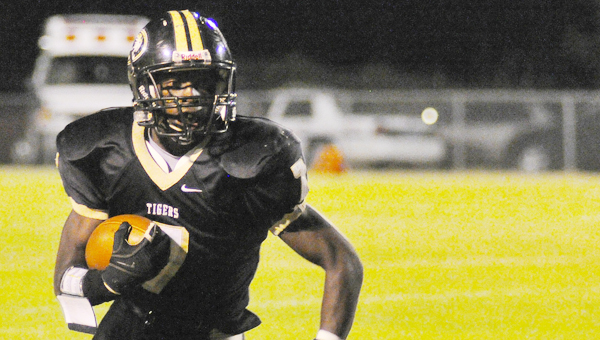 Greenville running back Jamall Hamilton eyes the endzone early in the first quarter of the Tigers Homecoming victory over Wilcox-Central Friday night. Hamilton scored on a 28-yard run.

Greenville High School spent most of the first half of Homecoming Friday night exchanging fumbles with visiting Wilcox-Central.

But while the Tigers could make the Jaguars pay for their offensive miscues, Wilcox-Central could not.

Greenville led 28-0 at halftime and pulled away even more for a 41-16 victory.

Tijuan Rudolph picked up a Jaguars fumble for Greenville’s first score, racing 41 yards for the touchdown. Another Wilcox-Central fumble resulted in a one-play drive from the Jaguars’ 28-yard line as Jamall Hamilton took the hand-off from quarterback Kent Riley on a sweep and tight-roped the sideline for six points.

Then, the Tigers started getting sloppy.

Rudolph tried to field a punt and fumbled it away to Wilcox-Central. GHS got the ball back on downs, but Fernandez Grey coughed it up on a running play.

Blackmon admitted homecoming activities throughout the week could have had something to do with that.

“I don’t know if you can keep a team focused,” said Blackmon. “They’ve got so much going on…there’s all kinds of things for them to get into it. What we tried to do at our pregame meal was to make sure they’re focused, because from that point on it’s time to take care of business. I think with the fumbles that’s what you saw, loss of focus.”

Against a quality opponent that could’ve been bad news for Greenville. Not, however, against the Jaguars, which fell to 2-4 on the year.

Riley added a a two-yard touchdown run in the second quarter. Wilcox-Central moved the ball to the Greenville 10-yard line, but turned the ball over on downs with 1:42 left before half. That was still enough time for Riley to find a wide open Darius Watson for a 78-yard touchdown pass.

The Tigers added a pair of touchdowns in the second half as the starters spent most of the half on the bench.

Blackmon said the team immediately started looking forward to next week. In a game that could decide the region title, Greenville travels to play Demopolis. Both sets of Tigers are unbeaten in region play. Demopolis beat Paul Bryant Friday night 21-17.

“I told our team we’re at the same point we were last year,” said Blackmon. GHS beat Demopolis in the regular season a year ago, but lost in the second round of the playoffs. Demopolis ended up winning the state title. “We didn’t perform. I told them they need to come in focused on Sunday and ready to work.”