No win for Georgiana, McKenzie finishes 72-6 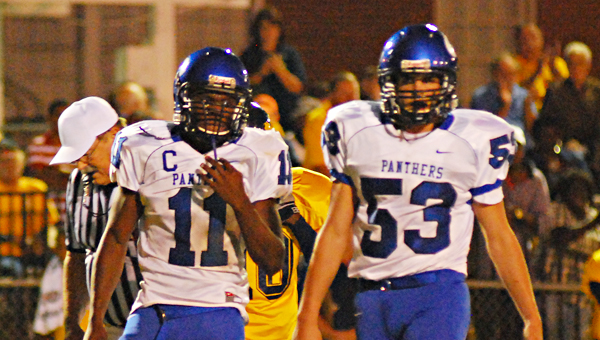 De'Kendre Binion talks with Antoine Boggan between plays. Binion scored the Panther's only touchdown of the night.

Fans who came out to see McKenzie versus Georgiana got to see two things: touchdowns and fireworks. At press deadline, McKenzie led 66-6.

Though a few fireworks were shot off before the game, the real excitement came when one of the stadium lights blew out in a burst of sparks and flame. The second quarter was cut short by 20 seconds, and the game was delayed for over and hour while crews worked to extinguish the burning light pole and return power to the rest of the stadium.

Nothing, however, could extinguish the flame that seemed to be in every McKenzie players eyes. Cliff Pugh lit up the scoreboard with a 35-yard touchdown, with Sir Wallace Presley picking up the extra two.

Georgiana answered on the their next drive, picking up six thanks to a 5-yard goal line crash by De’Kendre Binion.

McKenzie had some difficulty keeping their snaps low in the second, but the Tigers started driving again when they got the ball back of a Georgiana punt. One play and 78 yards later, Emmanuel Johnson increased the Tiger lead to 14-6.

For a few minutes, possessions bounced back and forth, with one team picking up a fumble only to have an interception a few plays later. Georgiana managed to drive all the way to the 3-yard line, but the touchdown that followed was called back due to holding. The Panthers would turnover on downs, giving McKenzie possession once again.

Emmanuel Johnson led the next drive, covering the length of the field with three rushes and the help of a 23-yard gain from Cliff Pugh. Johnson ran in the touchdown, and the two-point attempt was no good, bringing the score to 20-6.

The Tigers got the ball right back with an onside kick, and the trio of Pugh, Johnson, and Presley got McKenzie in the red zone. Presley picked up another six on a quarterback keeper, bringing the score to 26-6.

Again, the Panthers offense would have no opportunity to take the field due to another onside kick recovery by McKenzie. Presley found Ethan Faust for a 34-yard gain, and then ran in a 15-yard quarterback sneak for another touchdown. Johnson picked up the extra two points.

With 27 seconds left in the first half, play stopped when a stadium light caught fire, forcing McKenzie to cut power to the entire stadium.

An hour delay, however, was not enough rest for the battered Panthers squad. The Tigers came out even stronger than before, stopping Georgiana’s offense to a grinding halt. Though the onside kick attempt was unsuccessful, Pugh got the ball back for the Tigers with an interception on the second play of the third.

McKenzie pushed down the field once again, this time with Xavier Smith claiming the touchdown off an eight-yard run. Presley picked up two to bring the score to 42-6.

Another onside recovery led to another touchdown when a 25-yard pass found the hands of Matt Lewis. With the successful two-point attempt by Ladarius Grace, the score came to 50-6.

Emmanuel Johnson threw salt on the Panther’s wounds, running back an interception 40-yards, with Chuck Thompson grabbing the extra two.

Ladarius Grace scored another touchdown and the score stood at 66-6 at press time.