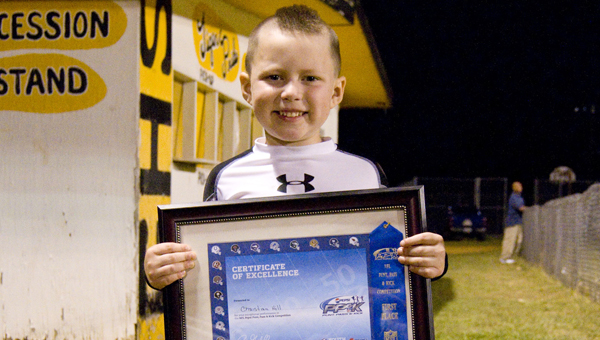 Christian Hill, age 5, won the punt, pass and kick competition while competing against 6 and 7-year-olds.

A local 5-year-old recently won the Greenville Punt Pass and Kick competition, despite the fact that he was competing with kids one to two years older than he was.

Christian Hill won the 6 to 7 year-old age bracket with a score of 320 points.

He is the son of Mandus and Tina Hill.

“That was high enough to be a teenager,” said Tina Hill.

In fact, the score was high enough to move him forward to the state competition, but he wasn’t allowed to compete due to his age.

“He was too young to go on, despite his score, but that is fine,” Hill said. “We are just glad he got to participate. There is always next year.”

This was Christian’s first time to participate in a Punt Pass and Kick competition. The event is sponsored by the NFL, and children ages 5-15 are allowed one punt, pass and kick and are judged on distance and accuracy.

Hills said Christian was so proud to get his blue ribbon and certificate from the NFL.

“All of his life has been sports,” Hill said. “For Christmas, he always asks for athletic equipment, especially anything Under Armor, instead of toys.”

Hill said Christian is currently undecided on the Alabama Auburn rivalry,  as she is an Auburn fan and his dad is an Alabama supporter. One thing the whole family can agree on, however, is their love for their home team, the Greenville Tigers. Last Christmas, Christian got a full uniform, with a real competition-grade helmet so he could go to the games dressed just like the players.

“He loves going to the games and throwing the ball around on the field with his dad,” Hill said. “After the game, we will always take him on the field so he can talk to the players.”

Though he only plays tee ball currently, Hill expects him to play football when he gets a little older.

“I don’t want him out there getting hurt just yet,” Hill said.