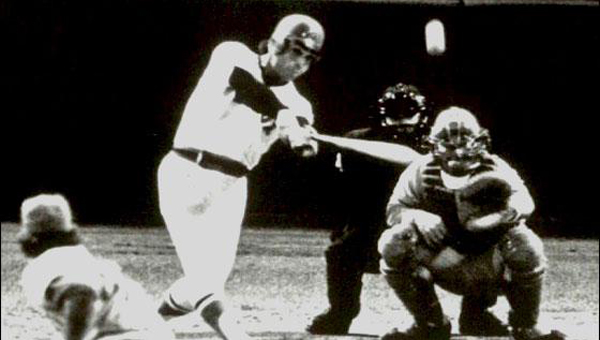 Bernie Carbo connecting on the three-run homer that helped Boston force a Game 7 in the 1975 World Series against the Reds.

First Baptist Church in Greenville will host a Wild Game Lunch starting at 11:30 a.m. at on Saturday, Oct. 9.

There is no charge for this event and guest speaker will be former Major League Baseball player Bernie Carbo of Diamond Club Ministry. Carbo, of Detroit, founded DCM in 1993.

Carbo played 12 seasons of professional baseball, but was out of the sport by age 33. Carbo spent most of his major league career addicted to drugs and told the Boston Globe’s Stan Grossfield in April that he was high in Game 6 of the 1975 World Series when his pinch-hit homer tied the score at 6-6 against Cincinnati. Carbo’s three-run belt set up a 12th inning homer by Carlton Fisk to force Game Seven, which the Reds were able to win.

Carbo, by his own admittance, played nearly every game on some sort of illegal substance.

“I threw away my career,’’ said Carbo, now 62, told the Globe. “If I knew Jesus Christ was my savior at 17, I would have been one heck of a ballplayer, a near Hall of Famer. Instead, I wanted to die.’’

Carbo was drafted by the Cincinnati Reds in 1965 at the age of 17. In 1969,  he was Minor League Player of the year, winning the batting title for the American Association with a .359 batting average. He was the Sporting News Rookie of the Year in 1970. He participated in two World Series and holds the World Series record for pinch-hit home runs. He played with the Cincinnati Reds “Big Red Machine”, Boston Red Sox, St. Louis Cardinals, and the Cleveland Indians.

Along with his ministry, Carbo conducts a fantasy camp at Hank Aaron Stadium in Mobile.