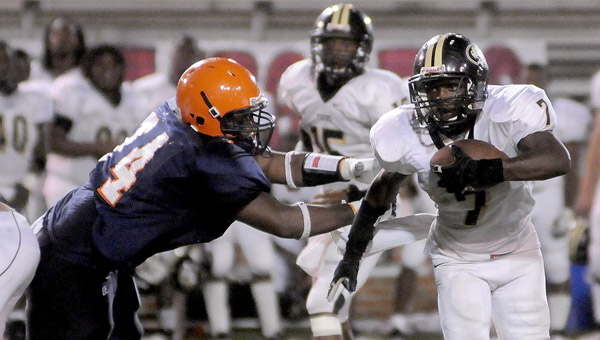 The Tigers jumped out to an 18-0 lead, saw the Trojans cut it to 18-7 at halftime, then watched a back-and-forth second half where Greenville would gain momentum with a scoring drive and quickly lose it by allowing CHHS to do the same.

Still, the Tigers’ 17 second-half points were too much for the Trojans to overcome as GHS won its fourth straight game 35-21 and improved to 4-1.

“I told the guys at halftime that they weren’t playing up to their potential,” said Blackmon. “We had six offensive possessions and scored on half of them, but then we allowed them to score before halftime. Give Coach (Hugh) Fountain credit because I knew his kids were going to come out and fight.”

CHHS came out of the locker room and took that fight to Greenville. The Trojans marched to the Tigers 15-yard line, but a 34-yard field goal was no good.

Running back Jamall Hamilton then scampered 60 yards for Greenville and Patrick Bedgood broke off an 18-yard run. Ozell Carter booted the extra point and GHS led 25-7.

Converting extra points this season has been an adventure for Greenville, admitted Blackmon. Friday’s game was somewhat odd, in that respect. GHS failed on all of its two-point conversion attempts in the first half, yet Carter connected on both PATs in the second. And booted a 21-yard field goal as well.

“Maybe it’s good because the other team won’t know what we’re going to do,” joked Blackmon. “Extra points and special teams are something we continue to work really hard on. We’re still feeling the effects of losing Stewart (Moody), because he did so much for us (last season).”

Blackmon was also pleased with Carter’s kickoffs. Three times Carter booted the ball into the endzone.

The Tigers opened the game by marching the ball down the field as quarterback Kent Riley scored on a two-yard run. CHHS fumbled the kickoff and Hamilton added a seven-yard touchdown. The Tigers went up 18-0 after GHS recovered a Quinton Moss fumble and Riley scored for Greenville in the second quarter.

Riley added a seven-yard TD in the third for GHS as well.

As a whole, the Tiger offense finished with 381 total yards of offense and 22 first downs. Hamilton had 120 yards on 12 carries.

“This was a tough game to lose,” said Fountain, following the loss. “This was a game that had no region impact, but one that this team wanted to win personally.

The Tigers host Wilcox-Central next week for homecoming.

No. 1 FDA beats up on Knights