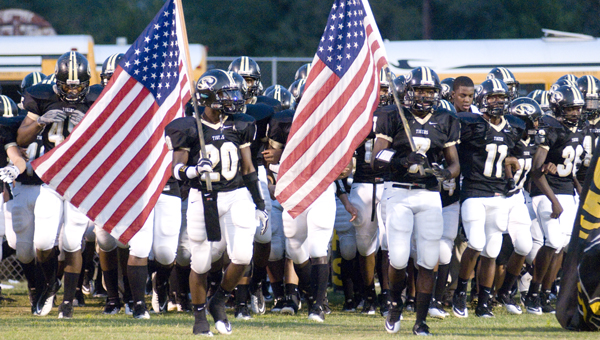 Or a fierce rivalry.

Greenville and CHHS have faced each other 57 times in football. The Trojans hold a 31-25-1 advantage, but Greenville won handily last season, 28-7.

“Anytime you get two teams together that are familiar with one another as we are with Troy (CHHS), it’s going to be tough game,” said Blackmon. “Our kids are fired up. They’ve played against Troy since middle school. They’ve beaten Troy and they’ve been beaten by Troy. They’re ready to go.”

The Trojans are a familiar foe and not just because the two teams have met so frequently on the gridiron. Blackmon’s predecessor Bryant Vincent was an offensive coordinator at CHHS. Blackmon played as a back-up quarterback for Coach Larry Blakeney’s Troy Trojans, so he knows Veterans Stadium and CHHS head coach Hugh Fountain. And former GHS principal Dr. Kathy Murphy is now the principal at Charles Henderson, taking the job prior to the start of the school year.

The Tigers roll into the game with an offense that’s quickly gaining confidence and a defense that recorded its first shutout of the season against Chilton County last week, 36-0. Sophomore quarterback Kent Riley followed up his five-touchdown effort against Paul Bryant High School with three rushing touchdowns against Chilton County.

“We’re pretty pleased with the way Kent has progressed,” said Blackmon. “We’re still working with him to cut down on a few mistakes, such as which receivers to look for and knowing the down and distance. But, as a whole, he’s played well.”

On the injury front, Blackmon said wide receiver Jamall Hamilton, who sat out last week because of a bruised knee, will return to action Friday.

As far as the Trojans, Blackmon said he expects a physical game from Fountain’s team.

“They’ve had some mistakes, but they could easily be 3-1,” said Blackmon. “They lost to Tallassee 28-27, but it was because they went for a two-point conversion.”

Greenville (3-1) at CHHS-Troy (2-2): 7 p.m. at Veterans Stadium…last week, GHS beat Chilton County 36-0, CHHS lost to Valley 40-0…the Tigers have beaten CHHS just three times since 2000, including last season’s 28-7 win on on Aug. 28…CHHS QB Corey Dennis is an athlete and rushed for 278 yards and three touchdowns against B.T. Washington two weeks ago…

Our Pick: The Trojans were blitzed by Valley last week and the effects of that loss could still be lingering. GHS, meanwhile, comes into the game confident. Edge, Tigers. GHS 35, CHHS 21