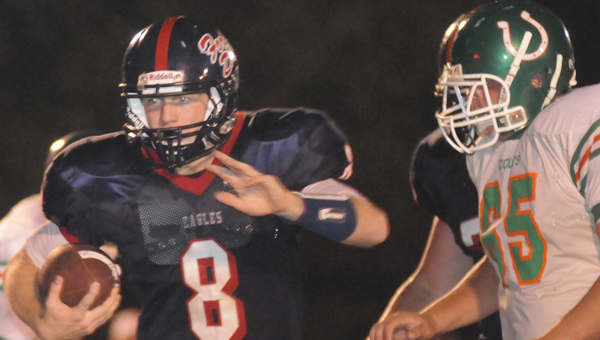 “We are playing hard, but we are not playing to our ability,” Sampley said. “We are going to have to step it up when we get to some of these teams down the road.”

Hooper got the ball first, to get the game underway, but soon turned over the ball on downs. On the first play of Fort Dale’ drive, Hunter Armstrong found Brandon Matthews for a 61-yard touchdown.

Hooper would get the ball back, only to fumble it again and give the Eagles another scoring chance. Manny Norrell and Brandon Matthews helped run the ball to the 4 yardline, and Matthews ran it in for a 4-yard touchdown, making it FDA 14 – Hooper 0.

“We’ve just got to try to get better every week,” Sampley said. “The key is to be a stronger team as the year goes on so you are better in November than you were in August.”

Only a few minutes into the second quarter, the Eagles got the ball back on their 29. Two long carries by Armstrong moved the chains down the field, allowing Perry Singleton to score on 6-yard carry.  The extra point was no good, FDA 20 – Hooper 0.

The Eagles would score one more, with 47 seconds left in the first half. Manny Norrell picked up 3-yards for 6 points. Fort Dale now enjoyed a healthy lead, 27-0.

Hooper found their way onto the board early in the third quarter, but the point after was blocked by Eagle Jonathon Scott.

Norrell picked up another touchdown with 2:45 left in the third. Hooper would answer one more time, but again, they failed to convert on the extra point to bring the final score to FDA 34- Hooper 12.

Armstrong was the leading passer and rusher, throwing 11 for 15 for 188 yards and two touchdowns, and picking up 96 yards on 11 carries.

Norrell had eight carries for 61 yards. Brandon Matthews had the hot hands for the night, with three receptions for 81 yards and two touchdowns.

The Eagle defense held the Colts to 122 yards total offense, with Matthews picking up 11 tackles and Stephen Till tallying in at 10.