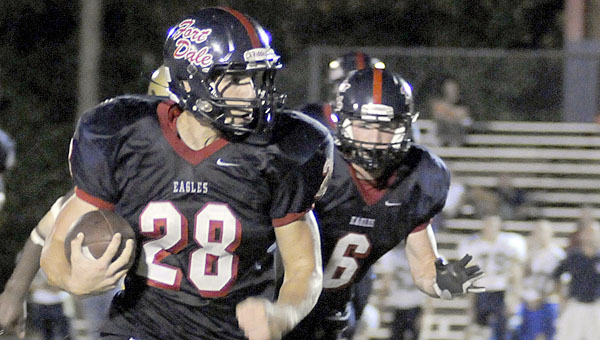 After last week’s 41-13 win over Lyman Ward, the Fort Dale Eagles have their sight set on Hooper Academy.

Despite the convincing victory, however, head coach Speed Sampley said it’s too early to write off any opponents.

“When you go to thinking you have everybody whooped is when you get yourself in trouble,” Sampley said.

“They don’t have a lot of speed, but they play hard and sound defense,” Sampley said.

“It’s a lot likewe see at least every other week, so it gives us something we can continue to work on,” Sampley said.

Dylan Jones,  a sophomore wide-receiver for Fort Dale, will not be playing against Hooper due to a broken hand sustained during the Lyman Ward game. Jones is expected to return after four weeks.

“It’s just something you have to overcome,” Sampley said about the injury.