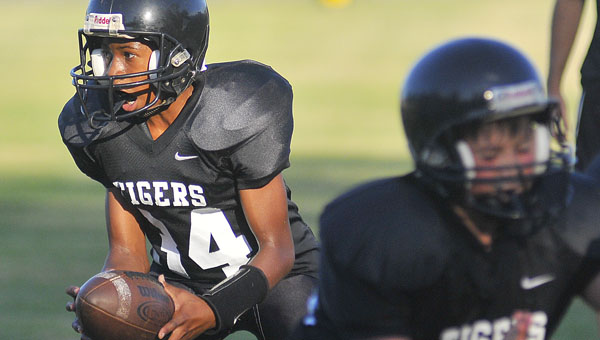 Jaquan Lewis threw and caught a TD for the GMS seventh grade team.

The Greenville Middle School Tigers picked up their first win of the season, beating Wetumpka on Thursday night in a road game.

The eighth graders were equally proficient at finding the endzone. Jerome Watkins had two rushing touchdowns.

The defense came up big for the eighth graders. Parrish Patton picked up a fumble for a touchdown and also caught a touchdown pass from Watkins. Wetumpka was inside the GMS five-yard line, but Javarious Cheatham recovered a loose ball to stop the Indians’ drive.

GMS’s game against Wilcox-Central last week was cancelled and coaches were unsure if the game would be rescheduled due to lack of participation by Wilcox-Central. GMS is 1-1 on the season after losing 52-30 to Stanhope-Elmore in the school’s first game.