Fort Dale rakes in the runs against Sparta

Coach Josh Beverley said the game was a welcome break.

“It was good to have a breather after three tough ball games in a row,” Beverley said.

The game was a chance for Beverley to work his entire roster. Matthew Burkett pitched three innings and stuck out 8, giving up only one hit.

Eli Blackmon pitched for the fourth, and final inning, and gave up one run.

“Sparta has been struggling,” Beverley said. “They have a lot of young kids.”

FDA had a strong day at the plate, grabbing 12 hits for the day. Jonathon Scott went 2 for 2 and Brandon Matthews went 2 for 4. Todd Burkett went 1 for 3 with a 3 run home run.

Fort Dale is now ranked 9th in their division, with a record of 14-9. Their region record stays at 5-3.

Beverley said after next week, his team would have a better idea of where they are as far as playoffs are concerned.

The Eagles will play Eastwood tomorrow and Lowndes on Tuesday, both of which will be at their home stadium of Beeland Park. 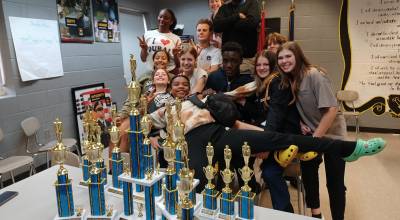