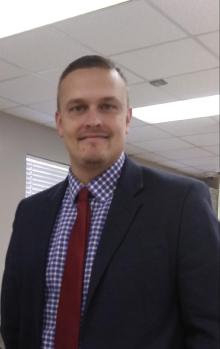 As he works to keep the school trending in a positive direction following its recent “A” school rating, he said he recognizes the importance of knowing when a change is appropriate.

“A lot of new administrators try to come in and put their fingerprints on everything, and what they end up doing is trying to fix a lot of things that aren’t broken,” Collins said.

Collins referenced the great work already underway, and put in place by the former principal and the entire teaching staff.

“There’s a lot of great things going on here, and I don’t want to mess with any of that just for the sake of it,” he said. “I want to do what’s right by the kids. I want to keep the kids in front. So what I’m going to be doing is a blessing. It’s already running. I’m able to sit back and watch, to watch it work.”

But sitting back isn’t exactly Collins style. He has already started doing exactly what a new principal should.

“He brings unique abilities and experience to the table,” said Butler County Schools Superintendent Joseph Eiland. “Mr. Collins is passionate about children and education. He has an outstanding resume.”

On top of that, Eiland said Collins comes highly recommended.

Collins said he’s already had conversations with his faculty.

“If you really want to know what’s going on within a school, what’s working and what’s not working, the teachers are the ones that know,” Collins said. “I have a complete open-door policy with my teachers. I want them to be able to come talk to me.”

Collins said he hopes an open-door policy will lead to a greater meeting of the minds between administrators and the tough job of being a teacher.

“I’m going to have consistent meetings with them to figure out what we are doing that’s great and what we need to work on,” Collins said.

With this focus on teamwork, Collins plans on taking the most logical, and practical, step he can take.

Collins said that McKenzie is 100% on graduation rates and almost 100% on college readiness.

Starting strong and staying strong is Collins philosophy, and he added he believes having the K4 classes all the way through the senior class in one building will be the key to that success.

“When all your first-graders walk in the door reading at or above grade level, that’s going to change the entire dynamic of our teachers, and how they can push their students,” he said. “This will translate over to middle school and on through high school. It creates a chain of excellence all the way through.”

His short-term goal is to keep doing the things McKenzie is already doing right now, but what is his long-term plan?

“To build up those achievement scores,” Collins said. “We have a 90, but maybe we can get even higher.”

“These kids are all such good kids,” he said. “They’re polite. When I speak, they speak back. I’ve never seen such well-mannered and responsible kids. I’m blown away.”

With the help of his teachers and the students who strive for excellence in McKenzie, Collins has found his place in the world.

“This is not a stepping stone for me,” he said. “I came here for a reason. I think with good leadership in the long term, that you can take a place like this and make it one of the top schools in the state of Alabama. And that’s really my goal. And that is a long-term commitment. I’m here for the long term.”

Collins is fully vested in both McKenzie School and the community that embarrasses it.

Next year, he will have a child in ninth grade, one in fourth grade and one in K5. (That’s not counting the one on the way!)

“Next year, I’ll have a son who’ll be in K5,” Collins said. “I fully expect to be the man that hands him his diploma when he walks across the stage.”