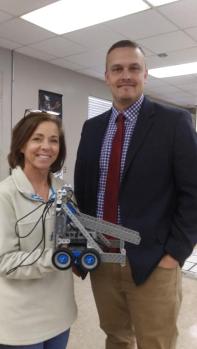 Innovations revolving around robotics are not an uncommon occurrence in our world.

The Butler County School System has featured robotics classes on its list of available subjects for some time now and have even held  robotic competitions, or Robot Wars as enthusiasts call them.

“It’s more a Middle School thing we’re doing right now,” said Michael Collins, McKenzie School Principal. “When you start it at the Middle School-level, the kids already have an idea about it by the time they get to high school level.”

And at the high school level, these classes begin to look like pre-engineering.

“We’re trying to develop those 21st-century skills at an early age,” Collins said.

Collins said he wants his students to already have an understanding of concepts such as coding before they enroll in a robotics class.

“Our STEM programs are very exciting,” he said.

He added he plans to put in the time and effort necessary to  write grants for his school.

Every year, there are dozens of grants that are never awarded because no one applied for them, Collins explained.

Not only grant funding, but community partnership is needed to help schools with their advanced programs.

Collins said he believes local legislators need to be involved in the schools because it shows their constituents they care about the education of the children in their district.

Darlene Odom, the Robotics Teacher at McKenzie, fully agrees with Collins about starting the students out early with this program.

“We use Vex products here,” Odom said. “They have kits that actually go down to the K4 level.”

“It’s hard to believe that children as young as K4 can create these mini-machines, but they do.”

“It’s basically learning engineering, team work, and programming,” Odom said. “They do it all … They take those kits, they build the product, and they run it with controllers, or they can run it by coding it. They actually program it to do the work.”

At McKenzie, the fourth-, fifth- and sixth -graders can study robotics as an elective class.

But by seventh-grade, it is a required subject.

“We set up obstacles for them to run through with a point system, and we have several different robots for them to choose from,” Odom said.

Currently in her second year teaching the robotics class, Odom said she loves watching her students work on robotics assignments..

“I love it. They have so much fun building these robots,” Odom said.

Right now, McKenzie competes  in county competitions with the middle schools in Greenville and Georgiana.

“We each take three teams to the competitions now,” Odom said.

They rotate out which school hosts the competition each year.

“Our goal is to go to competitions outside the county,” Odom said.

As the students progress and gain a larger skill set, they use different robotic kits.

Odom explained the beginning classes of fourth-, fifth- and sixth-graders use the Go-Kits.

“It builds on each other,” Odom said. “As they reach the next level, they just know what they’re doing.”

And these classes give students a set of skills Collins said he believes is one of the most important things a person can have.

“It teaches them critical thought and problem solving,” Collins said.

Collins said those skills will help his students master not only their classes, but their lives outside of high school.