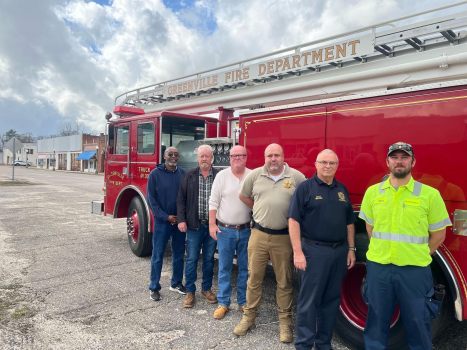 The Town of Georgiana received the gift of a donated, ladder-equipped pumper fire truck on Jan. 3, when the City of Greenville delivered a 1991 Pierce Pumper ladder truck.

Greenville’s council had deemed the truck as surplus equipment during a Dec. 12 meeting.

“Our fire chief, Tim Warrick, drove it down,” said Greenville Mayor Dexter McLendon. “We had lunch, and then came back.”

Georgiana’s fire department serves roughly 900 homes. Before receiving the truck, the department worked with a pumper truck not equipped with a ladder.

“This truck gives us the ability to spray water from off the ladder instead of firemen having to stand [on a structure] to do it,” said Georgiana Mayor Frank Betterton.

According to McLendon, Greenville purchased a new fire truck two years ago. After the truck was outfitted for use, McLendon approached Betterton to offer the truck to Georgiana.

“I just thought it would be nice to donate the truck to [Georgiana] and let them donate the one they had to McKenzie.” McLendon said. “We felt like it was an opportunity for us to help Georgiana out and them help McKenzie as well.”

Under resolution 2022-75, Georgiana received title for the truck previously belonging to the Greenville Fire Department at no cost. Greenville declared the truck a surplus item under Section 11-43-56 of the 1975 Alabama code authorizing the City to dispose of unneeded property.

During the same City Council meeting, Greenville leaders deemed surplus a 2011 Ford Crown Victoria, which was donated to the Lowndes County Coroner and a 1995 cargo trailer transferred at no cost to the Butler County Forestry Planning Commission.

Betterton said Georgiana’s City Council will consider a proposal Thursday for donating its fire truck to the Town of McKenzie. If passed, McKenzie will receive Georgiana’s older pumper truck at no cost.