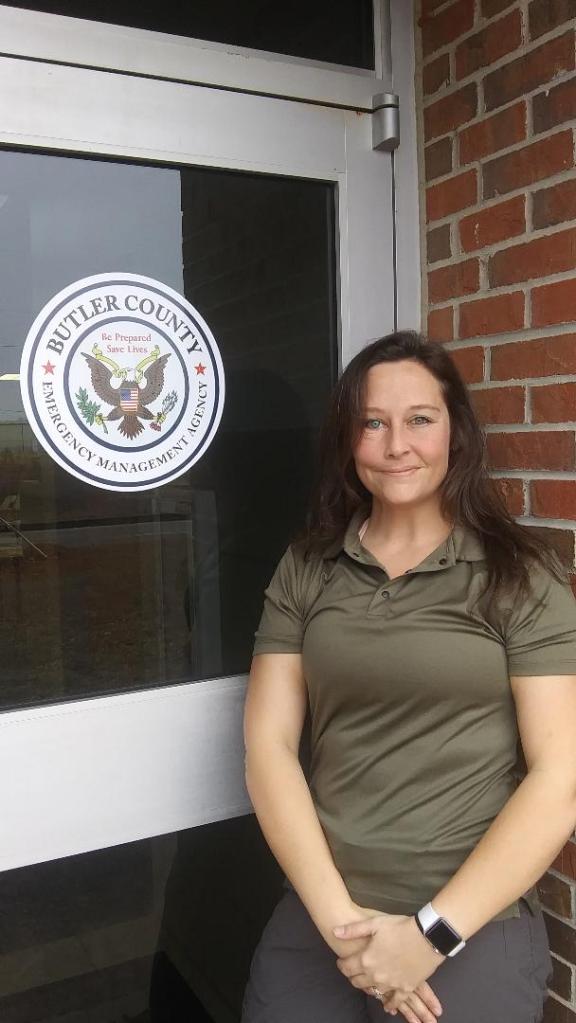 Butler County welcomes Greenville native Rosie Till as its new Emergency Management Agency director.
Till initially took the assistant EMA director position on Nov. 9, but took over the role of EMA director when the acting director resigned in December
“There are so many resources that you can get from other agencies as far as building your community to be better prepared for things,” Till said. “That’s very important in this agency.”
Till said she understands Butler County has limited resources at times, being such a small community.
“But if I need things from other agencies, all I have to do is call and tell them I need their help, and everybody comes in,” Till said.
And it is just this type of community strength and togetherness Till deems most important.
“I know the people of this community have always stuck together,” she said.
This is what has allowed Till to create such a solid foundation not only in her work life, but her personal life as well.
“I know the people and the connections I’ve made will get us through anything,” Till said. “The job at the EMA is to be a support for our first responders; and that’s county-wide.”
Till said she has an immense appreciation and respect for first responders in Butler County, having come from a background as a 911 operator.
“The volunteers, the fire department and police department, the ambulance services and 911; all of our first responders play a very important role in our community,” Till said.
She began working at the 911 call center in 2014. After three years of dedicated service, she left her position as a training supervisor.
In 2018, she spent time working in the Butler County Sheriff’s Office under Kenny Hardin.
Shortly after the election, she moved to the District Attorney’s office, where she gained even more experience.
Till graduated from Greenville High School in 2007.
“I’m grateful for all my experiences,” she said. “I’m grateful for the path that led me here.”
Throughout her life, Till said she has had the support of so many of her teachers.
“They have had such an impact on my life,” she said.
Being in the position of EMA director will enable Till to achieve not only the goals of the EMA, but to help her make the community she loves a better place.
“Rosie will be a great asset for our community,” said Charles Thomas, a volunteer fireman with the Central Fire Department said
The knowledge she’s gained from each experience and job has enabled Till to better perform the job and task placed before her now.
“I’m looking forward to working with the mayors and the commissioners; and all the people in my county,” Till said. “I’m humbled to be here.”