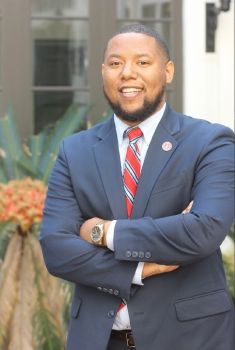 Selma native Robert Stewart, 32, assumed office as an Alabama State Senator representing District 23 on Nov. 9. Stewart gained the office with 53% of votes cast in the district and entered the office as the youngest senator in the Legislature.

In his first elected position, Stewart is representing the interests of his constituents by prioritizing economic development, health care, education, and infrastructure.

“Gratitude has always been the guiding force that inspired me to run [for office],” Stewart said. “I wanted to provide the district with good quality representation. Our state won’t reach its full potential until the Black Belt receives its dues in terms of investments in infrastructure, economic development, putting people first, health care, and education.”

“I want to be a fierce advocate for the counties,” Stewart said. “In Lowndes County, we’re dealing with a lot of population shrinkage. It’s really important to have someone [in office] who’s going to advocate and make sure our voices are heard.

“People know what they need.  We have long-standing issues. So, being able to carry the voices of the counties with me and work to build more inroads, that’s what I look forward to doing.’

Stewart said he is working to keep residents from leaving the counties. Workforce development is a key focus for Stewart, who hopes to bring more jobs and to support ongoing development efforts and healthcare initiatives.

Stewart earned an accounting degree at Tuskegee University and has worked in public accounting, state government, and nonprofits.

As a former staffer for U.S. Representative Terry Sewell, Stewart said he gained a deep understanding of constituent services.

Arthur Nelson, Lowndes County coordinator for Rural Alabama Vaccination Education and Events, said he has known Stewart since Stewart’s high school days and thinks of him like an adopted son.

“He’s an outstanding young man who will make a great difference for our district,” Nelson said. “He’ll be successful in carrying out his responsibilities as a Senator.”