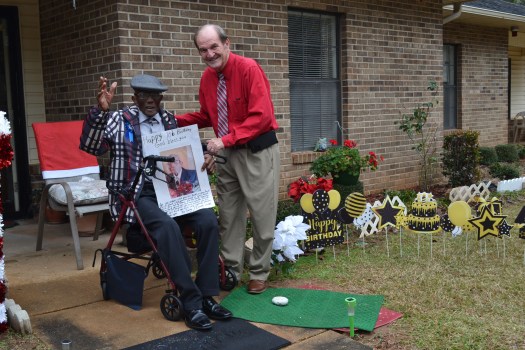 “River Falls is a place that’s in the country, about two miles from Andalusia,” Curry said.

Curry grew up with his two brothers and six sisters, believing strongly in two main principles – love the Lord and honor your parents.

“My parents were Christian,” Curry said. “My daddy carried me out to the church on the third Saturday of every month.”

He added that a deacon’s meeting was held on that day of the month.

Curry’s father took him along, so he could hear the word and learn the lessons of a true believer.

“He carried me out there,” Curry said. “I was about 6 years old. Even when he passed away, I still maintained that.”

The lessons Curry learned from his hard-working parents has stayed with him his whole life.

“My parents gave me some good advice,” he said. “My Dad told me to be honest, and work at what I know how to do.”

Curry attends St. Paul’s Baptist Church in Greenville, where he has been a member for 80 years.

The church was originally organized in 1883, more than three decades before Curry was born.

Although he never joined the Army, he has worked hard in both the construction trade and in custodial work.

“I worked in Pensacola,” Curry said. “I was doing construction. And, I worked at Chapman.”

Alfred Bargainer, who acted as an extra set of ears for Curry, also talked of the jobs Curry has held since moving to Greenville.

“He spent quite a bit of time at the Holiday Inn, when they first opened,” Bargainer said. “He also worked for the Beeland family, the Stanleys, and other families. He did whatever needed doing.”

Whatever Curry was doing, he was having a good time.

He spoke about his first time on an airplane.

“When me and my wife were married, we left here and went to Pennsylvania,” Curry said. “We stayed there two or three nights. Then, we went to New York.”

Curry laughed with the memory of being in the big city.

“It seemed to me that the police were everywhere,” he said.

He and his wife decided to move to Greenville in 1946, expanding their family along the way.

They were blessed with four daughters, although one did pass away in early childhood. The remaining three; Juanita Andrews, Annie Stone, and Mary Grimes, made sure to lavish their father in love every chance they got.

Since retiring and having the time to do what truly makes him happy, Curry said, his two favorite activities are going to church and reading his Bible.

“I like to read the Bible and I get a thrill out of it,” he said. “I like to tell people about it. I believe in God, and I teach people to the best of my knowledge to trust God.” Curry believes this is why he’s still here on earth.

But when God does come for him, Curry said he has no worries.

Then, Curry quoted his favorite passage from Scripture, Acts 16:31, which reads, “And they said, Believe in the Lord Jesus Christ, and thou shalt be saved, and thy house.”

“I love people, and I’d do anything I could for anybody,” he said.

Bargainer said Curry carries himself with honesty and integrity.

“He’s been the best father in the world,” Stone said.

Curry has lived in the same residence since 1995.

“And, he’s had the same phone number for 55 years,” Bargainer added with a laugh.

Another fun fact about Curry centers around the most recent election.

“It was recently discovered that Curry is the oldest registered voter in Butler County,” Andrews said.

Community members organized a parade through Curry’s neighborhood on Saturday. More than two dozen vehicles circled around the neighborhood as the occupants inside wished Curry a “Happy Birthday.”

Curry sat in his favorite chair and waved at all his friends who came by with best wishes for his special day.

“I just love people, all the people,” Curry said.