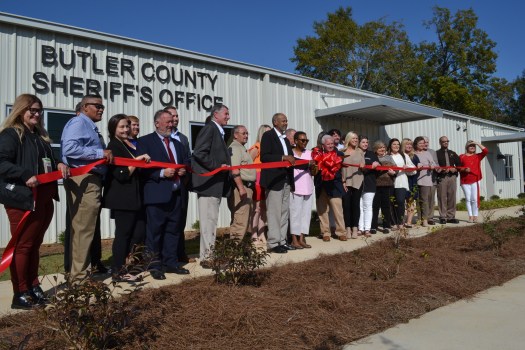 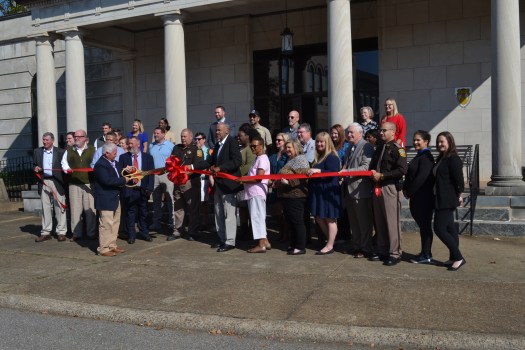 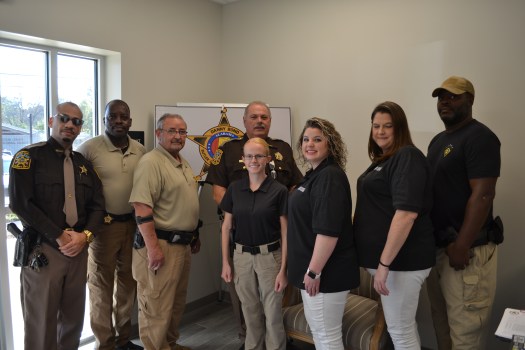 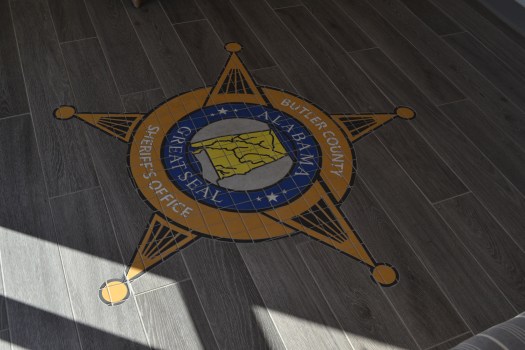 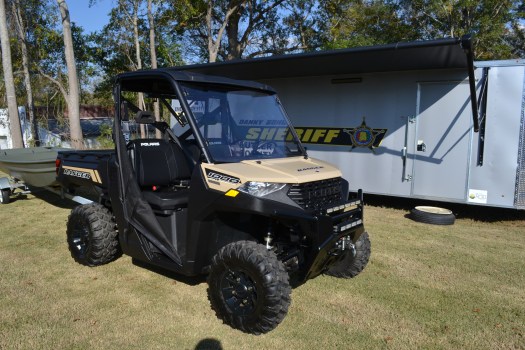 Greenville and Butler County government officials gathered for a pair of ribbon-cutting ceremonies Thursday afternoon, the latter serving as an unveiling of the new Butler County Sheriff’s Office.

The new office, constructed by Galahad Smith of Southland Builders LLC at a cost of $686,737.81, was officially completed Aug. 25 and boasts a variety of amenities, including a firearms vault, evidence storage room, interrogation room, conference room, break room, and

reception room along with various offices and restrooms.

“We’re proud of this building,” said Butler County Commissioner Joey Peavy. “It took a while to get it built. We started it around the time COVID hit, and you know what happened – we couldn’t get any material, and the material we could get skyrocketed in price … Galahad did a good job for us. The sheriff (Danny Bond) has been very patient with us on this.”

Peavy added moving the sheriff’s office into the new building opens up space in the courthouse. The crew also held a ribbon-cutting outside the courthouse to celebrate the completion of multiple renovations inside the building, including an elevator and handicap-accessible bathrooms.

“I would like to thank each of the commissioners for seeing the need in our sheriff’s office,” Bond said. “They could’ve put the money somewhere else, but they elected to go down the road with the sheriff’s office. You can see what we have here. It’s really nice. We’re proud of it. We’re trying to do things here to make life better for everybody than it was the day before.”

According to information provided by Smith, the 3,628-square-foot facility was built in the same location where the Greenville Gin Company once stood in 1903.

When discussing the project, Smith, whose fourth-great grandfather John T. Henderson once served as Butler County Sheriff in 1840, said he had a conversation with Sheriff Bond, who requested to have some form of visual representation of the department’s seal in the building.

Smith said after the conversation, he added the seal to the project at no additional cost as an homage to his great grandfather.

Smith incorporated the department’s seal as an inlaid mosaic on the porcelain tile floor in the entrance and worked with a company that produced a replica of the seal using water-jet cutting.

He added the seal is a few pieces away from being completed as a few pieces need to be appropriately colored green or red to perfectly match the seal.

According to Smith, other additions to the building not yet on-site, but slated to be added once available is a generator that will help make the building self-sufficient.

The new additions include a mobile command center, a side-by-side style of all-terrain vehicle, and a boat.

Bond said a case from a few months ago involving a missing person helped him realize the need for these items as it helps the department work better in the field and provides assets the department can use to help in a variety of scenarios.