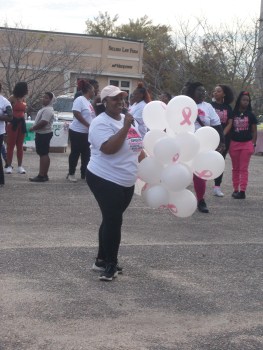 The walk, headed by Sonya Blankenship, featured biscuits courtesy  of Hardees, and Little Debbie snack cakes, for the survivors.

Lynelle Powell helped with registration for the family members of survivors, friends, and others who attended the event.

The event featured plenty of giveaways for the survivors, who received  bags, bottles, and T-shirts.

Angela Roach, a breast cancer survivor who conquered the condition 18 years ago, gave away free gift bottles for survivors.

“This is our third year supporting this event,” Gardner said. “We’re had several members who are survivors. We like to support our community.”

Blankenship asked all the survivors to gather into a circle, tell everyone who they were and how long they have been cancer-free.

33 voices rang out strong and clear in the fresh morning air.

Blankenship then asked Shirley Scott to speak to the crowd.

“Don’t let nobody tell you, you ain’t gonna make it,” Scott said. “Don’t go sit in a corner. Don’t feel sorry for yourself. Because if you do that, (you’re) gonna go down. Go through it with joy … “You gotta realize this ain’t the end of the story.”

She told the circle that when people cry with you, they cry tears of joy.

She informed the group that they lost five sisters.

“We need to start a survivor group,” she added.

The gathered survivors held a small parade, followed by their family and friends in the back.

The Greenville Police Department ushered them along the parade route in a formation that made a simple loop around the upper part of Greenville.

The DJ played “I Will Survive,” by Gloria Gaynor while the survivors walked.