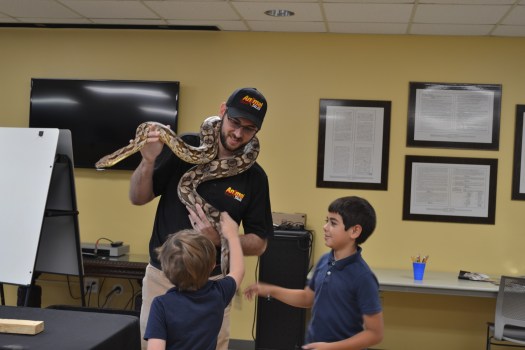 Over two dozen adults and children came out to see the animals up-close and learn something new about them from John Ham, the Southeast Director of Animal Tales, based in Pensacola, Florida..

“I brought my grandsons to see the animals,” said Emma Burkett. “They enjoy this.”

Ham brought a variety of animals, including a hairless rat and a hairy tarantula; a scaly lizard, and a fuzzy fruit bat.

Two creatures in particular, the hissing cockroach and boa constrictor snake,  garnered the biggest reaction from attendees, who  ‘oohed’ and ‘ahhed’  at the pair.

Ham explained re-homed meant some people decide to own  animals, and for whatever reason, can’t care for them anymore. Those people give the animals to the Animal Tales organization, where people affiliated with the organization care for the animals and give them a new home.

“My favorite thing is when the kids walk away and they can tell you about the animals they saw.”

Ham asked for volunteers to come up and help him do a skit with the animals. He told the crowd fun facts about the animals in a way that made it both entertaining and educational for all.

Ham and his partners expanded the animal kingdom to the virtual world via a program called Amazon Explorer.

“It’s a virtual program for people who don’t have the opportunity to see the program live,” Ham said. “They can go there for a one-on-one session. They can see me, but I can’t see them.”

He said he can put the animals right up to the camera so the kids can get a good look at them, without any fear of being up-close.

“They get to see it in a different light,” he said.

Animal Tales travels within a four-hour circle of Pensacola, and they offer new programs every week.