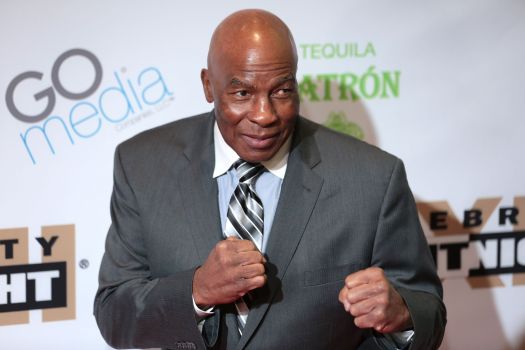 Editor’s Note: Anecdotes and accounts of Earnie Shavers’ life were provided by biographer Marshall Terrill from his book, “Welcome to the Big Time.”

Born in Garland, Earnie and his family were sharecroppers, and they endured a tough life where segregation was the rule.

“We were poor,” he told his biographer, Marshall Terrill. “No phone, electricity, or indoor plumbing. We had an outhouse and drank from a well. The best hope for a Black growing up in the South was just to survive.”

“Our family couldn’t even afford paper lunch bags,” he told Terrill. “We wrapped our lunch in old newspapers the white people discarded.”

But the most traumatic event in his young life, which took place in 1950, turned out to be his saving grace.

Shavers’ father had purchased a mule to help on the farm and was making payments to the man he bought it from. With only two payments remaining, Shavers was unable to make the payments on time due to the harsh weather that had engulfed the south, making farming difficult. The man demanded the mule back, but Shavers refused. Words were exchanged and the man left, but vowed to return.

Under threat of violence, the elder Shavers left Alabama, vowing never to return, making his way to his great-uncle’s house in Newton Falls, Ohio.

He got a job making car bumpers, and it wasn’t long before he sent for his family to join him. Once the family was settled in, the children were enrolled in Newton Falls Elementary School. Earnie remembered the people up North treated his family differently than the people in the South.

“They treated my family with respect,” he told Terrill. “That took some getting used to.”

According to Terrill, Earnie was smart and excelled in school, doing well in both history and mathematics. He enjoyed his time in school, and later commented on how good the school was there.

Between 1969 and 1995, Earnie shined in the boxing world’s spotlight, living larger than any son of a sharecropper could begin to imagine.

Earnie earned a reputation amongst his peers as one of the hardest-hitting boxers in the sport’s history. He finished with a career record of 74-14-1, with 68 victories coming by knockout.

His career featured two attempts for the world heavyweight title, but Earnie, nicknamed “The Black Destroyer,” lost to Muhammad Ali in 1977 and Larry Holmes in 1979.

Because of his famed boxing career, his friend from Nashville, Ken Boutwell, tried to get the road from the Garland exit named after Shavers, but Hank Williams, Sr., had already beaten him to it.

“He never acted like he was famous,” said Boutwell, addinghe had it on good authority that Earnie had been in a nursing home for the last year.

Although he endured a tough start to life, Earnie leaves behind him a storied boxing career, dreams achieved, and family and friends who will miss him.