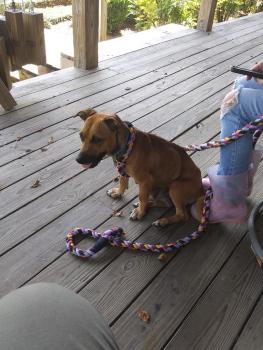 Like some of the other airports around the county, this flight was also delayed. One hour, to be exact.

But no one complained. The sun was shining, a breeze was blowing, and all humans present had their arms full of adorable puppies.

One mother dog, Harper, and her litter of seven beyond precious babies, as well as three adorable pups from Animal Tails Rescue in Luverne, waited patiently for the pilot to land.

Kimberly Matthews from the Second Chance Animal Rescue Center in Greenville, and her husband Tom, were there to see that all the animals got on the plane safely.

“The pilots use their time as flight hours and they can write the gas off as a donation to the Humane Society,” Tom said. They don’t get paid for doing this. And they’ve done thousands of flights.”

Alabama Puppy Rescue Flights is based in Enterprise, but the volunteer pilots fly all over to pick up puppies and fly them to no-kill shelters in Florida.

The organization was started in 2015 by Mike Young. Since then, he and his pilots have rescued more than 7,000 dogs and puppies from certain death.

Once a shelter is full, it has no other option but to turn the animals away or euthanize them.

But now, Young’s organization can give these shelters another option.

“Mama dog, Harper, was fortunate to have puppies and go off on this rescue,” Kimberly said. “Normally, she would have been put down after the puppies were weaned.”

Second Chance Animal Rescue is located on Airport Road about a block from the old Searcy School House. They hold the animals there for seven days. After that, the animals are sometimes put down.

It takes a week to process the adoption when a family finds its forever pet.“Some people lose interest after they find out they can’t take it home that day,” Kimberly said. “Sheriff Danny Bond has been a big help with the animals.”
She added Sheriff Bond will send out a couple of trustees with an officer and pick up the stray and lost pets when someone calls.

“At least they can get some food and be safe,” she said.

When they can, the Humane Society here will arrange for one of Young’s team of pilots to fly here and conduct a rescue. It is literally an in-and-out operation.

The pilot expertly lands the plane, volunteers push the doors open and jump out, and within minutes, the puppies are in the plane.

The rescuers jump back in, close the door, buckle up, and the plane taxis to the end of the runway and awaits permission from the tower before taking off.

It is a combination of both joy and sadness as the plane flies off into the wide blue sky.

The puppies are safe. But there is a loneliness that follows their departure.

They will have a happy and playful ‘lay-over’ in Enterprise, and Young himself will fly in and take them on to Orlando, where they will get settled into their new forever homes.

For more information on the program, contact Kimberly Matthews at (334) 437-2150. She works with the Second Chance Animal Rescue on Airport Road here in Greenville.

Please remember that these shelters are always in need of donations. Whether it’s time, money, or pet supplies. All help is appreciated and greeted with a wag.