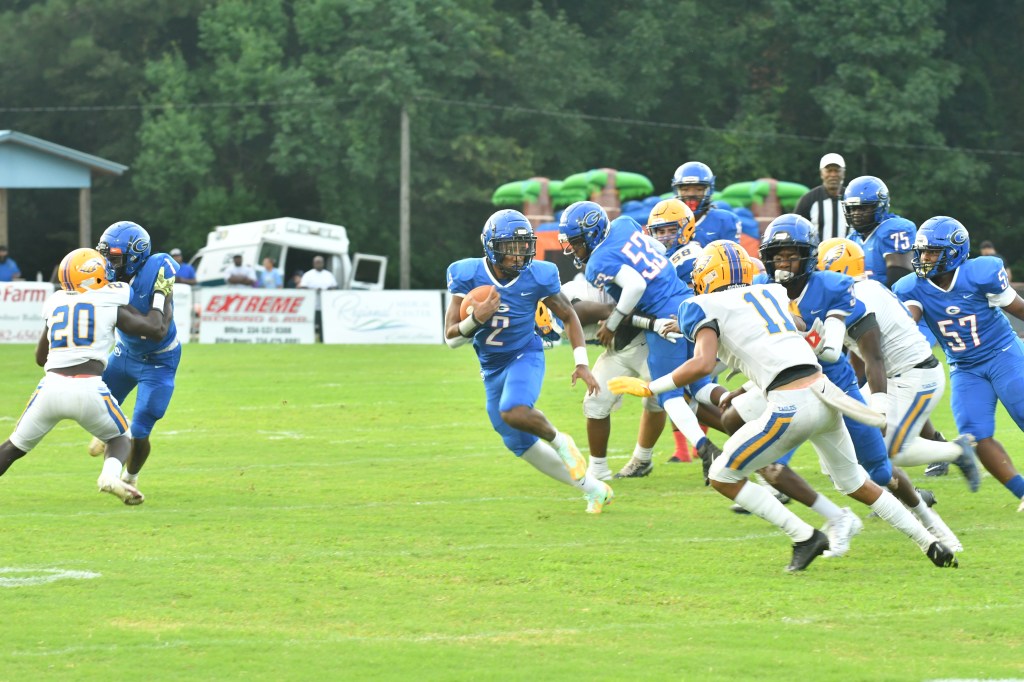 A pair of high school football teams starving for a victory after 11 consecutive losses met Friday night at Harmond Field, but only one team exited the gridiron feeling sated by the sweetness of success.

“He (Morgan) went in the game because No. 4 (Princeton Miles) was cramping up,” Bess said. “He played late at (cornerback). No. 5 (Demetrius Watson) tipped it up, and No. 10 (Morgan) came up with the interception.”

Despite a game marred by miscues and over 40 combined penalties between the two squads, including more than half-a-dozen instances of offsetting penalties, one which led to a Panther being ejected, Bess said he’d worry about those matters later as he basked in the feel-good moment.

Georgiana junior running back Cameron Miles scored the go-ahead touchdown with 6:32 to play in regulation to take an 18-14 advantage over the Eagles. Miles, who plays linebacker on defense, recovered a fumble on the Eagles’ ensuing possession with 5:22 remaining in the contest.

The Panthers began the contest with solid field position after a 32-yard kick return by Watson set Georgiana up with first-and-10 from the Eagles 43-yard line.

Morgan, who also started at quarterback for the Panthers, punched in a 2-yard touchdown run to put his team ahead 6-0 with 8:01 to play in the opening stanza. Georgiana botched the exchange from snapper to holder on its lone extra-point attempt and went 0-for-2 on its two-point conversion attempts in the game.

Class 3A W.S. Neal had a pair of first-half touchdown plays – an 8-yard run and a screen pass that racked up 60-plus yards after the catch – negated by penalties.

The Eagles trailed the Panthers 6-0 at halftime.

A fumble by Eagles kick returner Lakietric Barnes recovered by Georgiana sophomore wide receiver/safety Ledarrius Allen at the W.S. Neal 32-yard line set up the Panthers’ second scoring drive of the night. Morgan capped off the short drive with a 5-yard run off the right side where he shook two Eagles defenders to make the score 12-0.

W.S. Neal answered with a pair of touchdowns, one via a pass from Hodges to Ty’lon Harrison on a fourth-and-goal from the Panthers 14-yard line and another via a 9-yard run one play after Cameron McCall intercepted an attempted screen pass by Morgan.

Sedrick Samuel converted on both extra point tries, and for a series, the Eagles led 14-12 with 7:54 remaining in the final frame.

Morgan found success through the air with Panthers sophomore wide receiver Kaveon Miles. The pair connected on four second-half passes for 112 yards, with his latter two catches of 38 and 5 yards setting up the game-winning score.

“They’re best friends,” Bess said of the duo. “No. 7 (Kaveon Miles) is a dog. They’re both 10th-graders. They’ve played ball together their whole lives. If he wants the ball, I’m giving him the ball because he’s going to make a play.”

Georgiana (1-0) will travel to Williams-Vickery Field for a matchup against Class 1A, Region 2 foe McKenzie on Friday night.