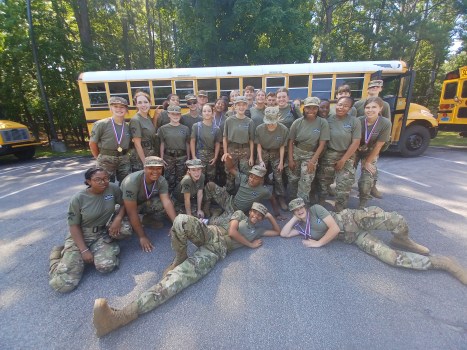 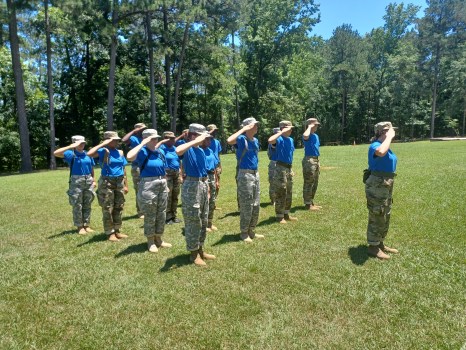 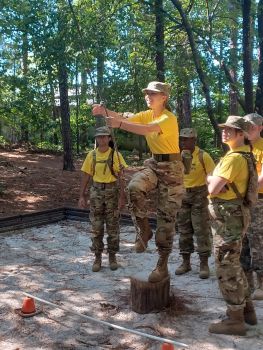 Cadet Harper Watson, junior, prepares to swing across on a rope as fellow cadets look on. Photo Submitted 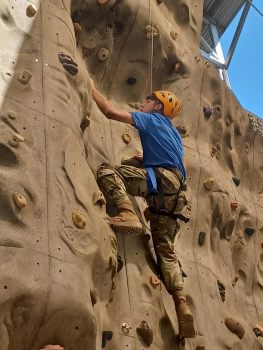 The Greenville JROTC cadets learned many valuable skill sets while attending Alabama JROTC Leadership Camp at Lay Lake this year. Located just 15 miles south of Columbiana, Alabama, the lake is the perfect place for the young cadets to test their skills, while having some fun doing it.

Camp was held June 17-20 at the 4-H Center. Alabama 4-H partners with the United States Army to help fund these leadership camps.

Col. Alan Hester of the JROTC program at Greenville High School(GHS) said that the local Rotary Club and the Lions Club made very generous contributions towards the transportation costs as well as the meals for the cadets to and from the camp.

Hester did add that he liked for the cadets, “to have a little bit of skin in the game.” The cadets paid $30 towards some of their own necessities, and for a tee shirt to bring back home with them.

The volunteer cadets, from grades 10-12, started out at just 16; but as more slots became available due to other schools pulling out, Greenville was able to send 29 to the camp, their most ever for this event.

“Most schools only take eight or nine cadets,” Hester said, “but I’ve made this a priority.”

“All 29 cadets graduated. We started out with 29 and we ended up with 29. And we were really proud of that,” Hester added.

The JROTC Leadership camp is meant to do just that; promote leadership in the cadets. The camp gives them the opportunities to test themselves and show off the scope of their skills. The Greenville JROTC volunteered for leadership positions prior to camp starting, knowing it would mean more work and an earlier departure time, Hester’s cadets took on the challenge. “The cadets did an outstanding job with the leadership roles they took on and did an exemplary job,” Hester said.