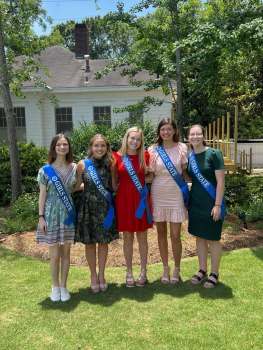 Alabama Girls State is a week-long event, offering the best and the brightest young women in our region a chance to see the inner workings of our democracy.

This year, Troy University in Troy, Alabama, hosted the 2022 session.

The Girls State program, which ran from June 5-10, is one of the most respected learning programs in the United States.

This program is hosted by the American Legion Auxiliary (ALA) Alabama. They are committed to developing young women for future leadership positions in our country.

Five young ladies from Butler county represented our area with not only pride, but a will and determination to show the rest of the state exactly what our county has to offer.

Hannah Scruggs, daughter of Jason and Christi Scruggs, attends McKenzie High School. She was assigned to the city of Keller and was a member of the newspaper staff.

Vivian Gates, daughter of Dale and Cheryl Gates, attends Greenville High School. She was assigned to the city of Camellia. While there, Gates ran for Lieutenant Governor, worked on the newspaper staff and wrote a bill that passed both the mock House and the Senate.

Rosie Rogers, daughter of Jason and Joy Rogers, attends Fort Dale Academy. She was assigned to the city of Keller and was elected the Federalist Party’s Commissioner of Agriculture and Industries, which is part of the executive branch.

Claire Hutson, daughter of Ward and Michele Thigpen, attends Fort Dale Academy. She was assigned to the city of Tutwiler and elected the mayor of Tutwiler.

Timber Black, daughter of Stacey and Dixie Black, attends Georgiana High School. She was assigned to the city of Goat Hill. Black was elected Parks and Recreation director on her city council.

All of the ladies were asked the same final question, What was your favorite part of Girls State?

Hutson responded with, “Meeting some of my newest best friends.”

For those of you who are new to Girls State, or it’s been a while, it is an opportunity for female junior classmen to learn about the inner workings of our government.

Once the girls arrived on the Troy campus and were settled in, they were randomly assigned a city and a county to represent.

Then, they were assigned a political party, purely fictional of course. These two parties are the Nationalists and the Federalists.

They are also assigned a legislative body.

Most of the fictional cities operate along the same lines as a real city. A mayor is elected, as well as four city council members.

Each girl, there were hundreds in attendance this year, had an opportunity to run for an office and give a speech. Sometimes several speeches, depending on the position they were running for.

One of the highlights of this year’s event was getting to go to the State Capital building in Montgomery, as well as visiting the Governor’s Mansion.

This year marked the 80th year that Girls State has been held in Alabama.

In 1942, the first Girls State was held at Camp Grandview Park, just north of Millbrook. Back then, there were less than 70 girls in attendance.

Several keynote speakers were there this year, including Katie Britt, who is currently running for Alabama Senate; US District Judge Anna Manasco; and Governor Kay Ivey, who was herself a Girls State Lieutenant Governor.

Ivey told the girls, “No matter the direction you want to take in life, this week is already preparing you to get there.” She concluded her speech by telling the girls, “Sometimes the best man for the job is a woman.”