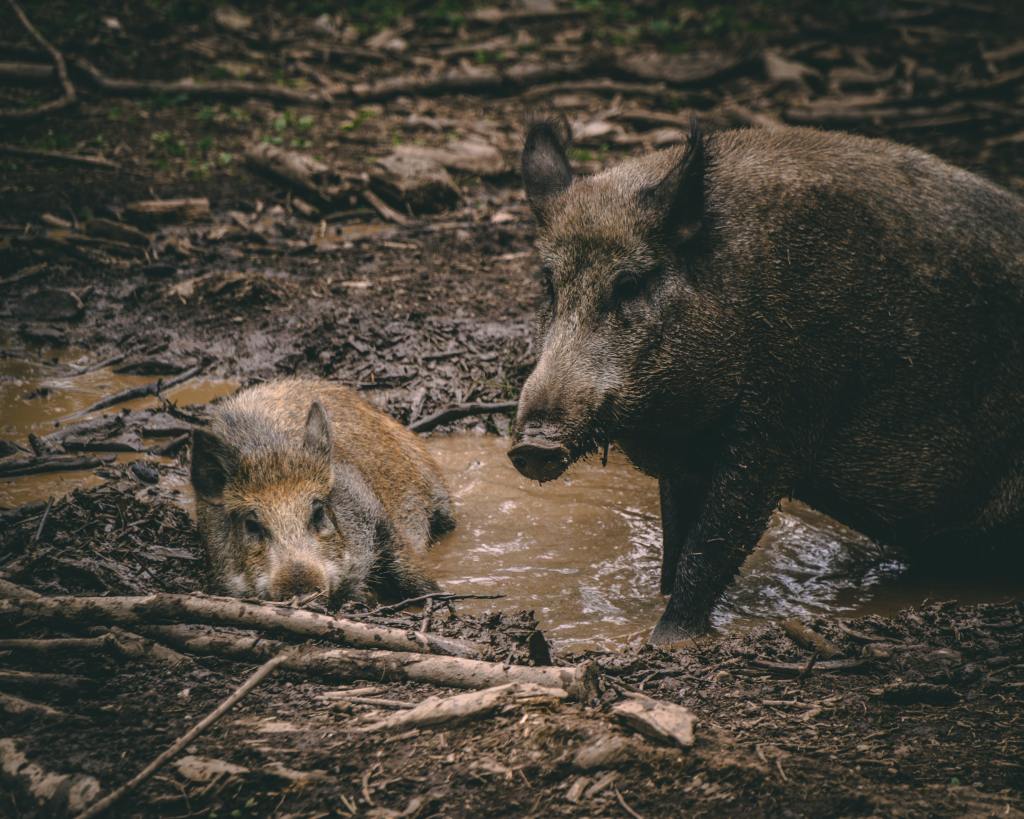 “The greatest population numbers are in the southern half of the state,” Smith said. “In the more northern counties of Alabama, wild pigs occur in smaller localized pockets all the way up to the Tennessee border.”

The USDA Animal and Plant Health Inspection Service has several maps that show the progression of wild pig populations across the United States over the years. People can view these maps at www.aphis.usda.gov/aphis/ourfocus/wildlifedamage.

Agriculture
Wild pigs can impact both crop and livestock producers. Pigs will eat and trample many row crops. But their rooting and wallowing behaviors also cause damage to the field itself. There is also the possibility of them preying on livestock, especially newborn calves, lambs and goats.

Smith, who is also a professor in the Auburn University College of Forestry, Wildlife and Environment, said wild pig damage to agriculture likely exceeds $1 billion nationally each year.

Wildlife and Natural Resources
Much like the damage to agriculture, these pigs will cause damage to the environment by simply being there. They use trees as scratching posts, consume tree seedlings and prey on young wildlife.

“Wild pigs compete for food and cover resources with some of the state’s economically-important game species such as white-tailed deer and wild turkeys,” Smith said. “They can also have a significant impact on water quality in local watersheds.”

While calculating their damage to natural resources and wildlife is much more difficult, damage estimates likely double those known for agriculture.

Human Health
Wild pigs’ impacts to water quality crosses over into possibly affecting human health. Smith said they have been known carriers of more than 30 bacterial and viral diseases and numerous internal and external parasites.

“Swine brucellosis, leptospirosis, toxoplasmosis and swine influenza are only a few of the common diseases that may be transmitted to humans, livestock or pets,” he said. “Transmission may be through direct contact with the animal or its bodily fluids or indirectly through feeding and watering containers, ponds or streams that are contaminated.”

Smith said the prevalence of these diseases will vary based on location. It is important to wear latex gloves when handling or butchering wild pigs.

“It’s much easier to control wild pigs when they first invade and only a few individuals are present,” he said. “Significantly reducing or eradicating them takes a lot of work if done properly.”

There are a few methods of wild pig control that Alabama landowners can use. Smith said through systematic, premeditated and intensive removal efforts, people can can substantially reduce, if not eradicate, populations from small acreages.

“In most cases, hunting or opportunistic shooting of wild pigs will rarely control a population,” Smith said. “Live trapping using large, corral style traps and humanely euthanizing the pigs is the most cost- and time-effective means of removal.”

Note. Per Alabama law, trappers and hunters must euthanize wild pigs caught in corral traps or bayed by dogs on site. It is illegal to transport live wild pigs in Alabama.