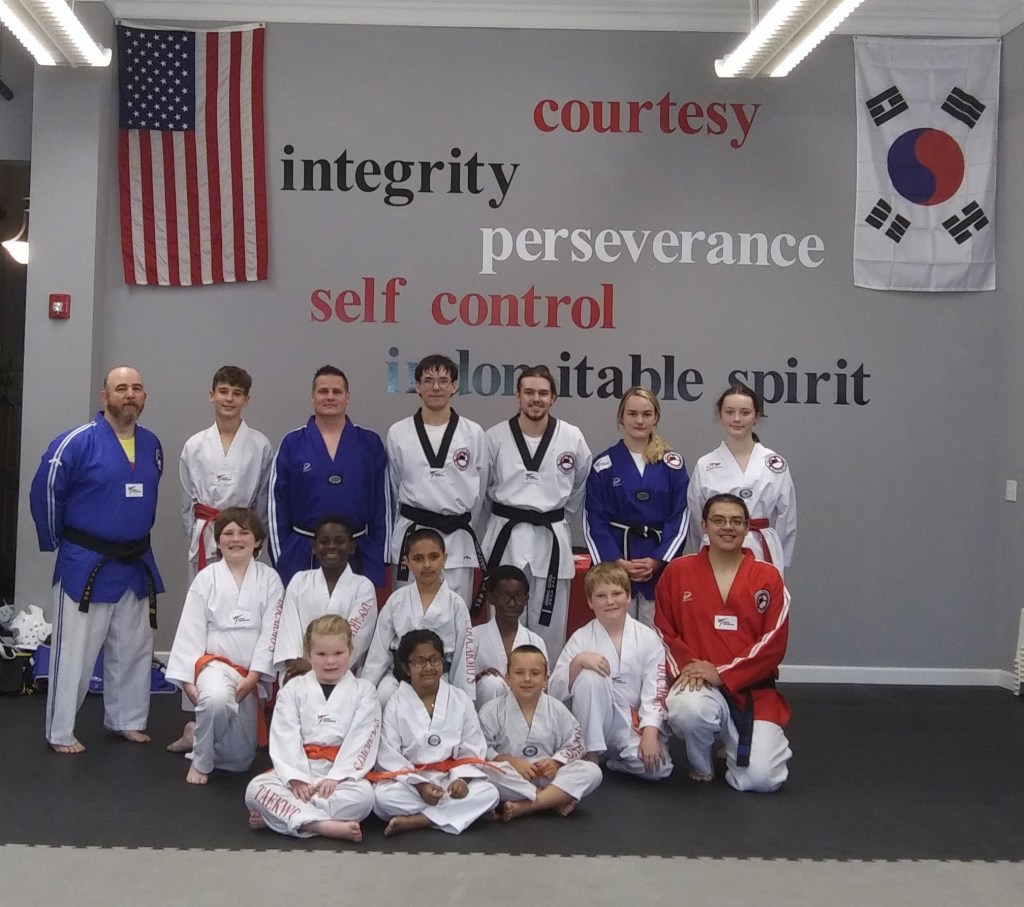 While the Docarmo Taekwondo Center here in Greenville does teach self-defense, as with most centers, the main focus is on tournament competition.

On Saturday, May 21, the students at Docarmo’s suited up like stormtrooper’s going into battle. With their protective gear from head to teeth to toes, they came prepared to kick some board—literally.

Thursday, May 26, the results of the testing were announced. Of the 14 participants, only one did not move up in degree. Those that did pass all the requirements received their new belts and their certificates.

Taekwondo relies on striking with the legs more than the hands. This particular form of martial arts puts emphasis on head height kicks, jumping and spinning kicks and fast kicking techniques.

The students focus on their stance, which is narrower than other forms of martial arts, such as Karate. This is what gives them the ability to land higher kicks.

But the defining hallmarks of Taekwondo are its focus on speed and agility. The speed behind a punch or kick is what determines the power and effectiveness of a move.

The Docarmo students have spent countless hours honing their skills, and these very skills were on display Saturday.

This was a promotional testing day at the center. The testing determines whether or not a student moves up in degree with their belts.

Robert Stall, the instructor at the Greenville Center said, “There are nine belts between white and black, and nine different black belts.” Students practice for years to master the skills necessary to progress through these degrees.

Testing is conducted not only to see if the student is learning and executing the moves correctly, as with the younger white, orange or yellow belts. It also gages the progress of the student’s leadership skills, as with the higher degree belts.

The Saturday group, from small white belted children, to fully grown black belt adults, competed in sparring matches to test their ability to land both punches and kicks properly.

The students also demonstrated pattern exercises, where students learn various moves and stances and execute them at different speeds; some almost as slow as a yoga move, while others were so fast, if you blinked, you missed it.

But as anyone who has ever watched a martial arts competition, or a movie for that matter, the most exciting part of it all is the board breaking exercises.

These students did not disappoint. They all brought their A-game.

From the smallest and youngest to the powerful black belts, this part of the event was truly worth the wait.

These students kicked sideways, front ways, and up and down. Boards were broken all over that room.

Stall, who helped the little ones choose which board they would attempt to break (and they all did), told the more advanced of the group that they had to choose their boards for themselves.

He said, “I can’t make the decision. It’s your destiny.” If that isn’t worthy of a bumper sticker, then nothing is.

Each student that practices the art of Taekwondo progresses at their own pace. It’s individual. The student receives encouragement from their instructor and their fellow students. This helps to build confidence and self-esteem.

It’s alright to feel a little nervous in the beginning, or even at a competition.

“Being nervous is a good thing,” Stall told the group. That means your mind is focused on the present moment.

Taekwondo is a Korean form of martial arts. It dates back to the original nine Kwans, or martial arts schools that opened after World War II in Seoul, Korea.

The practice has since been adopted by the South Korean military as part of a soldiers’ training.

The Docarmo Taekwondo Center is located at 606 E. Commerce Street in Greenville.  They can be reached by phone at (334)220-5835 or email at dtcmontgomery@gmail.com. You can visit their website at www.trytkdfree.com or on their Facebook page.