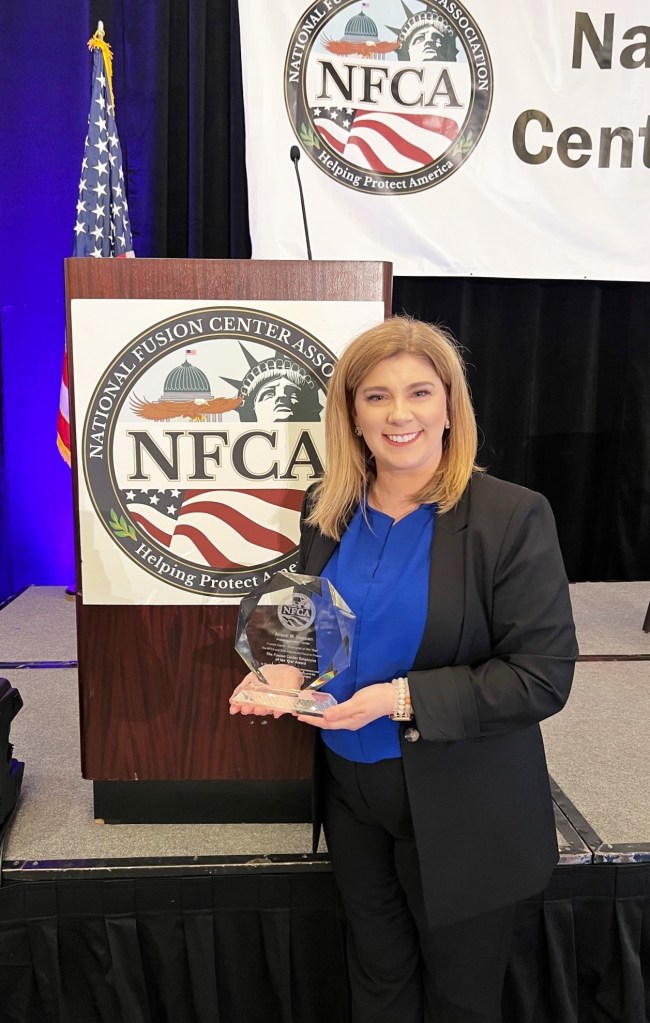 The Alabama Law Enforcement Agency (ALEA) is pleased to announce the national recognition of one of its own within the Alabama Fusion Center (AFC), Intelligence

Analyst Alison Duncan, as this year’s Fusion Center Employee of the Year. Duncan was selected from candidates nominated from the 80 fusion centers across the United

States by the National Fusion Center Association (NFCA) at this week’s Annual Training Event in Alexandria, Va. She was presented the award and recognized for her contributions and exceptional service by the NFCA on Wednesday, April 13.

“This prestigious recognition is a true testament to Alison’s hard work and dedication to the Alabama Fusion Center, as well as the entire Agency,” ALEA Secretary Hal Taylor said. “We are extremely proud of Alison and grateful to the National Fusion Center Association for acknowledging her talents on a national level.”

AFC Director and NFCA Vice President Jay Moseley agreed and said, “We are extremely proud to have Alison in our center, and no one deserves this award more than she does. Intelligence Analysts are the backbone of every fusion center, and they are the ones working hard every day to keep our nation and our state safe. Alison is a true leader and is passionate about her job.”

Duncan has been with the AFC as an Intelligence Analyst for 10 years, serving for the past six years as a lead analyst. She supports local, state and federal law enforcement on a variety of cases involving missing persons, criminal cases and national security matters. In 2015, she earned a master’s degree in Homeland Security and Emergency Management from Auburn University Montgomery. During the recognition ceremony, NFCA noted Duncan’s engagement with and support to not only the AFC, but also to the National Network of Fusion Centers (NNFC) and the Southern Shield Fusion Center Group, comprising 16 fusion centers across the Southeast. Reading from Duncan’s nomination, NFCA President Mike Sena stated, “Alison’s exceptional service to the NNFC, her contributions to the development and sustainment of the AFC and

Southern Shield, along with her significant efforts to improve the security posture of both Alabama and the nation is commendable.” Sena went on to state, “Alison’s dedication and willingness to always provide exceptional service has enabled the AFC to develop deep and abiding relationships with law enforcement jurisdictions throughout Alabama, the Southeast region, federal partners, and with the NNFC, which has considerably enhanced the information-sharing capabilities of all fusion centers.”

Fusion centers are intelligence and information sharing hubs designed to “fuse” information between the intelligence community and local, state and federal agencies and private-sector entities. They were implemented following the terrorist attacks of Sept. 11, 2001, which killed almost 3,000 individuals. They are charged with improving the nation’s preparedness against terrorist attacks and deterring criminal activity. Previously, the Department of Homeland Security (DHS) and the Federal Bureau of Investigation (FBI) have recognized Duncan for her commitment to engagement and intelligence sharing.