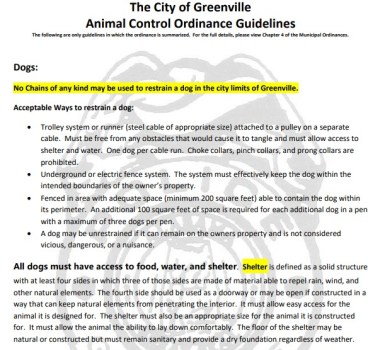 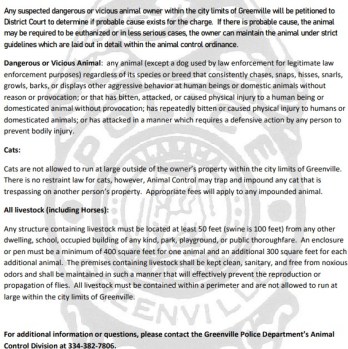 In October 2021, the city of Greenville enacted an ordinance that outlaws chains of any kind from being used within the city limits to restrain a dog. The mandate lists trolley systems or runners, underground fencing, and fenced in areas as acceptable ways of restraint. The ordinance also states a dog may be unrestrained if it can remain on the owner’s property and is not considered vicious, dangerous or a nuisance.

Greenville Police Chief Justin Lovvorn said during recent years it has become evident that such a law needed to be in place. Lovvorn said city police officers work closely with animal control officers and both units worked together to come up with an ordinance fair to dog owners and their pets while safeguarding the public.

“During the last couple of years, I have heard a lot from patrol officers and animal control officers about issues with dogs being chained. Due to the fact that both units are constantly offering each other feedback, it became obvious that it was time to put something in writing,” Lovvorn said. “There is no justifiable reason that anyone would want us to not get away from chaining dogs. They are often chained in order to build up their muscles for fighting. In the past, dogs used in fighting that has taken place in more rural, less patrolled areas have been housed inside the Greenville city limits. Dog fighting is already illegal, but this will help us combat it and the inhumane practice of chaining dogs.”

After about a year of research and reaching out to other law enforcement agencies who have similar successful ordinances already in place, Lovvorn  said he felt comfortable finalizing the ordinance. Lovvorn  wants the community to be knowledgeable regarding the new ordinance and he said so far, things are working out well. He said he is optimistic that the new rules will prevent issues that officers have seen in the area from getting worse and he hopes that the overall treatment of animals by those that may have not been making the best animal care choices, will improve.

Available for citizens is an easy-to-understand piece of literature that outlines the main points of the ordinance. For a complete copy of the ordinance, contact the City Clerk’s Office at  (334) 382-2647 or the Greenville Police Department at (334) 382-7461.