Get Ready for the 2022 Spring Turkey Season 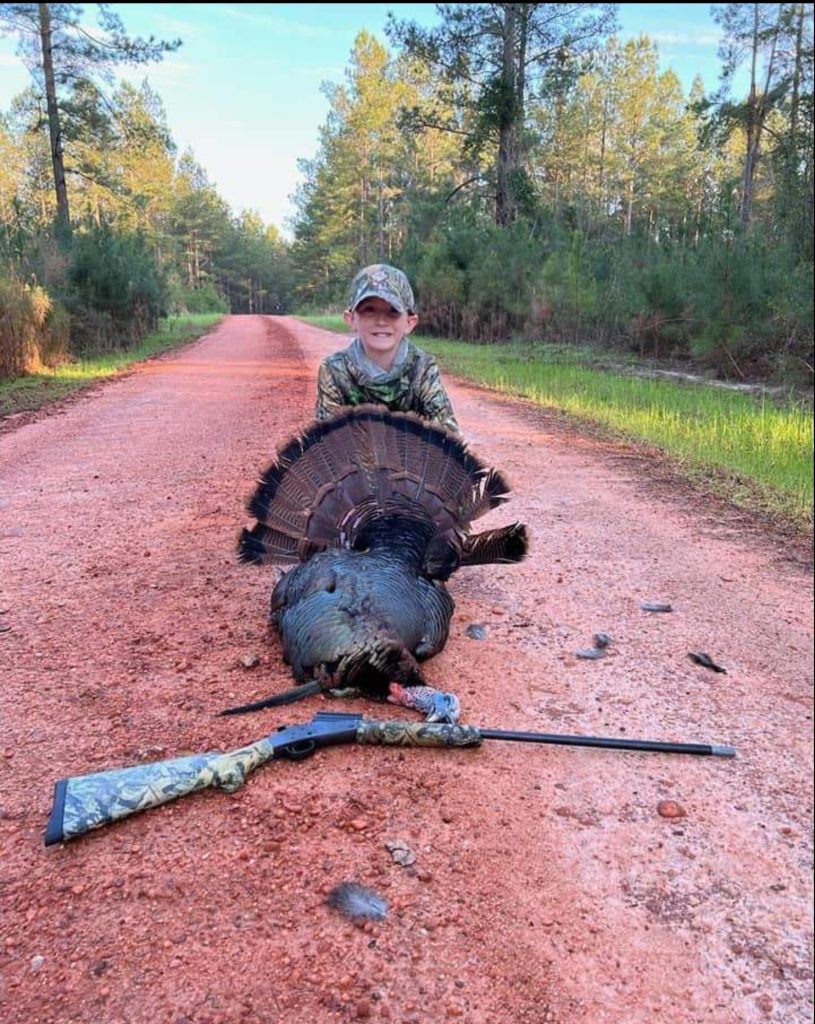 Logan Warrick, 12 years-old, got his first turkey last weekend in Pigeon Creek, Alabama. Logan is the son of Orin and Laken Warrick.

The unmistakable echo of a wild turkey gobbling through the air makes the hair rise on most turkey enthusiasts. Even though Alabama offers a variety of wild game hunting seasons, one of the most captivating for turkey fanatics is spring turkey season.

Comparatively, the season is one of the shortest on the calendar, which draws the thrill of the hunt even closer. This year’s slot comes with some new variables in play. Here are a few points of interest for turkey veterans as well as newcomers.

Get to Know Your Bird: Eastern Wild Turkey

The Eastern wild turkey is the only turkey subspecies native to Alabama. This subspecies lives in mixed pine and hardwood ecosystems especially in bottomland and upland areas. In these regions, turkeys will forage from mast-producing tree species in the forest.

According to Alabama Cooperative Extension System Forestry and Wildlife Specialist Mark Smith, turkey populations can fluctuate each year because of several reasons.

“Poor hatches during previous years, weather and changes in habitat on or surrounding the hunting property are some of the causes of population change,” Smith said. “Although there seems to be a noticeable decline of turkey populations throughout their range, many areas still support stable or increasing local turkey populations.”

The typical mating season for Eastern wild turkey begins in early March, a few weeks prior to the beginning of Alabama turkey hunting season. During this time, mature male turkeys or “gobblers” will audibly drum and physically strut to entice courtship with a hen. This is where the hunt begins.

This year’s spring turkey season begins with a youth-only hunting weekend March 19 and 20, which is later than previous years. Most areas of Alabama will begin their hunts March 25 and conclude May 8. For more insight on which zone you will be hunting in, see the Outdoor Alabama map for reference.

“Probably the most significant change that hunters must be aware of is that decoys are prohibited during the first 10 days of the season,” Smith said.

For turkey harvests in 2022, the maximum bag limit for wild turkey has been reduced from five to four birds. Each bird harvest must be immediately recorded within 48 hours to the Alabama Department of Conservation and Natural Resources (ADCNR). Hunters may complete this task in a few different ways.

The countdown begins for avid turkey hunters in Alabama. Smith calls for everyone to get out there and have a great season. The outdoor fun is almost here, and Alabamians are curious about what 2022’s turkey season will bring. For more information on wild turkeys, please visit the Alabama Extension website at www.aces.edu.

***Cole Sikes works in communications and marketing for the Alabama Cooperative Extension System. He can be contacted at jcs0098@auburn.edu.

Party at the Ritz