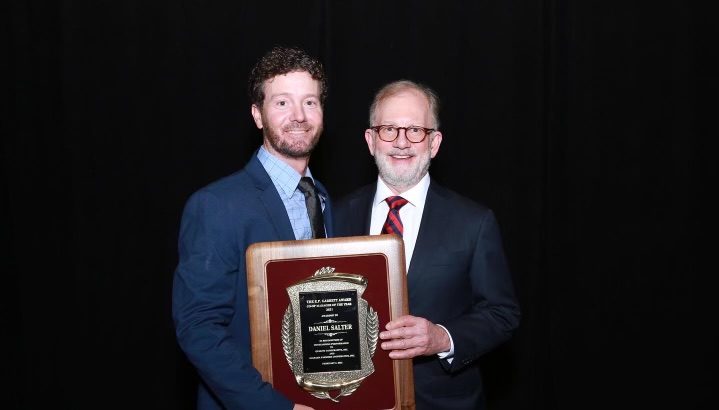 Salter, a Greenville native, began his career at Butler Farmers Co-Op in 2015 as the store’s assistant manager before being promoted to general manager.

Salter was presented the award at Alabama Farmers Cooperative’s membership meeting and awards banquet held on Feb. 2 at the Renaissance Montgomery Hotel and Spa.

The banquet included introductions of board members and sponsors, dinner and live music, followed by a video featuring the award recipient and announcement.

“They always play a highlight video that sort of teases up to the final announcement,” Salter said.  “The video traveled down I-65 passing Montgomery and getting of at exit 130 – it really didn’t sink in that it was our store until I saw them pass by the Alabama Power parking lot on the Bypass and then turn into our parking lot.”

“It was a surprise for sure,” he said.

Salter said the award was made even better because his family was there to help celebrate.

“I was pretty shocked to see the whole Salter crew there,” he said. “It’s pretty impressive how well AFC and my wife coordinated getting that many family members there and situated without me ever knowing.  It’s one thing to be presented an award, but to have your family there with you makes it extra special.”

Salter said although there’s only one name on the plaque, there are many responsible for the recognition.  “Butler Farmers Co-Op has a second to none team that prides itself on customer service.”

“AFC is such a family focused organization,” said Salter.  “It’s a joy to work for a company that has the same values that I try to instill in my own family.”

I thank God upon every remembrance