It is official, life actually was better in “the good old days,” according to a recent study by YouGov, an international research data and analytics group.

The results of this YouGov study, which consisted of participants 50 or older, showed that more than half of those over 50 think that life in the past was more desirable than that of today.

Eight in 10 participants said that life was simpler in the past, and 55 percent wished they could turn back time.

The study showed that the bulk of the over 50 participants considered “the good old days” superior because life was lived at a slower pace and humans were more kind and patient.

The top reasons given by the study participants who think life is better today were: Infectious diseases are now largely treatable, drunk driving is illegal, seat belts come standard in all automobiles and there are laws about wearing them.

The 1960s came in second place for “What is your favorite decade,” with the 1970s receiving the most affection.

During this favored decade,  the 1972 G rated movie The Elephant Who Adopted that Born Free Couple  could be seen at The Ritz during the Saturday or Sunday “young folks matinee” for a mere 40 cents. 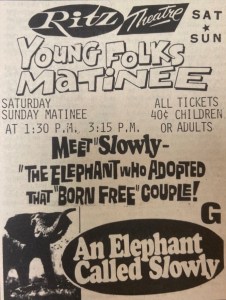 This same year, The House That Dripped Blood, rated GP (parental guidance suggested) also played at The Ritz. The ad for the movie touts that the film was in color and included vampires, voodoo, vixens, and victims. 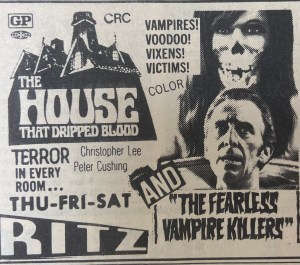 “When I was growing up there was no cursing or nudity in movies. My parents didn’t worry about what I would see at the movies. Young people of today do not need to base any part of their lives on anything they see at the movies, on TV, or social media. They want the fairytale things they see that are not real life. The stuff kids watch now proclaims that you can do anything with no consequences and it influences them to be cruel to each other when treating others like you want to be treated should always be top priority,” Reaves said.

Another leisure pastime mentioned in a 1972 issue of The Advocate was attendance of the 38th edition of the Sugar Bowl, played at Tulane Stadium in New Orleans, Louisiana.

“A. G. and Orell Grant really enjoyed the Christmas and New Year’s holidays for their little granddaughter Nichole Grant from Atlanta was their guest. During this time Nichole’s parents Mr. and Mrs. Rod Grant enjoyed a visit to New Orleans and attended the Sugar Bowl game. There were quite a few disappointed people glued to the tube watching bowl games and we hope they enjoyed their black-eyed peas and hog jowl more than the ballgames,” as published in the Jan 20, 1972 issue of The Advocate and restated from last week’s column. 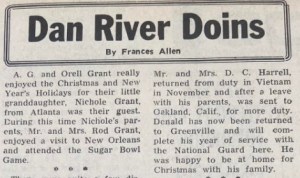 The Sugar Bowl has been played annually since Jan 1, 1935 with games being held at Tulane Stadium until it was moved to The Superdome in 1975.The last time this match was played on natural grass was in January 1971. The 1972 game, featuring the third-ranked Oklahoma Sooners of the Big Eight Conference and the #5 Auburn Tigers of the SEC, was the last Sugar Bowl played in January until 1977, as it moved to New Year’s Eve night for the next four editions. The Sooners won 40–22.

Agriculture is Big Business….was the heading of one 1972 Greenville Advocate article. The piece stated that agriculture was the nation’s biggest industry with assets totaling $318 billion, compared to $3.6 trillion in 2021. There were around 16 million people working in some phase of the industry during 1972 and in 2021 this number was close to 19 million. This edition of the paper declared that the average demand for beef in 1972 would be 116 pounds per person, compared to 58 pounds in 2021. Also in this issue it was noted that a state amendment was passed in 1972 that allowed dairy farmers to vote among themselves on check off assessments for all milk sold. Also legislation was passed to “provide slaughter of 10% of all laying flocks more than 5.000 birds” in response to a depressed price for eggs and severe financial strain on commercial egg producers. It was also made public in this issue that Alabama had been declared hog cholera free by the U.S.D.A.

A 1972 sales paper from Reid’s Grocery & Market advertised a 14 ounce bottle of Del Monte Ketchup for 19 cents, round steaks for 98 cents a pound, and red apples priced at 49 cents per pound.

Food Giant’s most recent sales paper promotes the sale prices of a 20 ounce bottle of Hunts Ketchup for $1.00, round steaks 99 cents a pound, and red apples $2.00 a pound. 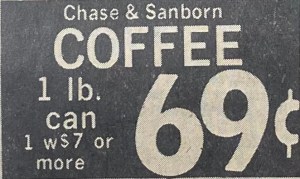 We may now have more reasons than ever to look back through the years with nostalgia, the question is, will 2021 ever be referred to as “the good old days”? It remains to be seen. However, let us not forget generations before us that were just as eager to bid adieu to an ending era-including the Ancient Sumerians who also felt the pang of nostalgia with their complaints having been found in Mesopotamia inscribed on 5,000 year old tablets.

Whether a preference for days of old is derived from missing the simple days in Mesopotamia, before “cradle of civilization” status had been reached and things like inventing the wheel and creating the first system of writing were not on the to-do lists, or if days gone by are favored due to past affordability of items, more respect and patience, 25 cent movies, or from any other fond memories, we must remember that even the archaic sumerians assumed that things had never been worse.

CrimeStoppers offers reward for Most Wanted