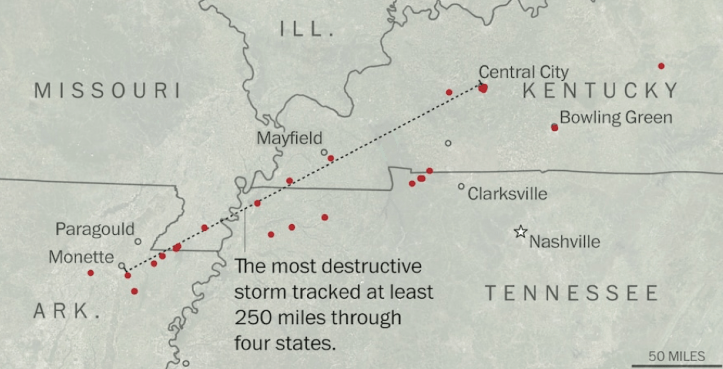 Thirty-five tornadoes reported in nine states across the South and Midwest.

A path of destruction left nearly 100 people dead, multiple injured, and hundreds of miles of damage.

This is was what people witnessed heading into the weekend.

Nearly three-fourths of the confirmed deaths occurred in Kentucky with at least four confirmed in Tennessee, two in Arkansas, and six workers at an Amazon warehouse in Illinois.

According to reports from the National Weather Service, six of those- Arkansas, Illinois, Kentucky, Missouri, Mississippi, and Tennessee — confirmed getting hit by tornadoes.
One of the more devastating tornadoes, dubbed the “Quad-State Tornado”, traveled 200 miles.
This amount of distance took the tornado across four states.
Those states being Arkansas, Missouri, Tennessee and Kentucky.
This deadly tornado may have set a record for the longest continuous tornado in American history.

Storm surveys will confirm or deny this at a later date.

Cleanup and recovery efforts by those affected are still ongoing.