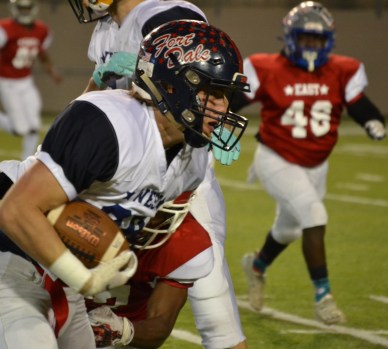 Samuel Bloodworth runs the ball for the West 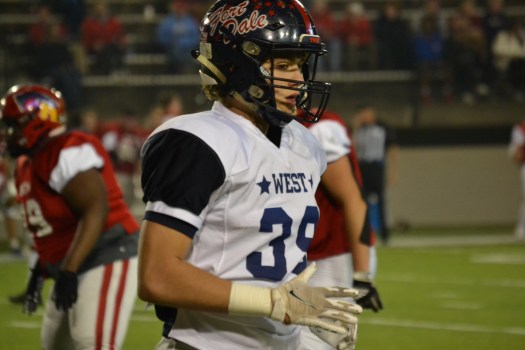 Close up of Samuel Bloodworth following a major play 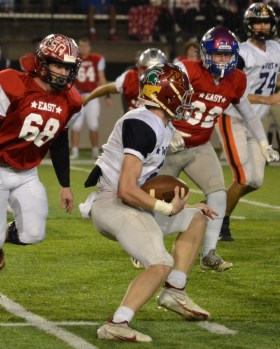 A member of the East team runs the ball down field 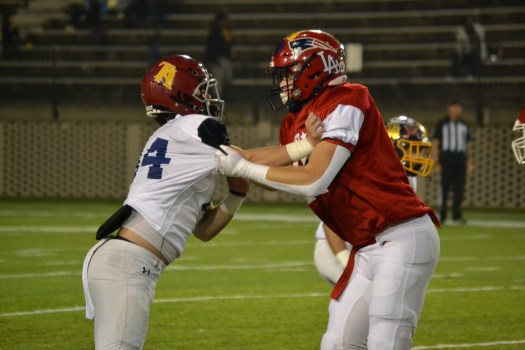 The West defense collides with the East offense

The East struck first during the first quarter following a 38-yard touchdown reception with ten minutes until the second quarter.

Following the punt, the West began their drive on their 35-yard line. After multiple drives downfield, the West managed to put points on the board after a 25-yard touchdown reception.

Halfway through the first quarter, Corey Brown with Valiant Cross Academy secured a 25-yard touchdown for the East. The extra point attempt kick by Pike Liberal Arts Kameron Baker was no good.

With two minutes until the second quarter, the West took the lead after an 18-yard touchdown.

The West furthered their lead halfway through the second quarter after a four-yard touchdown run followed by a two-point conversion.

After gaining possession of the ball, the East made it a one-score game following a nearly 60-yard touchdown reception and successful two-point conversion.

With under three minutes to go until halftime, Ja’Daniel Nettles ran 71-yards to the end zone for the West. Parker Spears with Sparta Academy then completed a two-point conversion to extend the West’s lead.

However, seconds later, Radonda Beauchamp Jr with Glenwood Academy ran 61-yards to score for the West. The West attempted a two-point conversion but was unsuccessful.

In the opening seconds of the third quarter, the West managed to extend their lead further following a 33-yard touchdown reception by Jack Standeffer.

Halfway through the third quarter, Jackson Self with Lowndes Academy ran two yards for the East. The East’s two-point conversion attempt was no good.

By the fourth quarter, the West still led the East 37-33.

With three and a half minutes in the game, the West scored a final time. Afterward, they successfully held off the East offense to secure a 44-33 win.