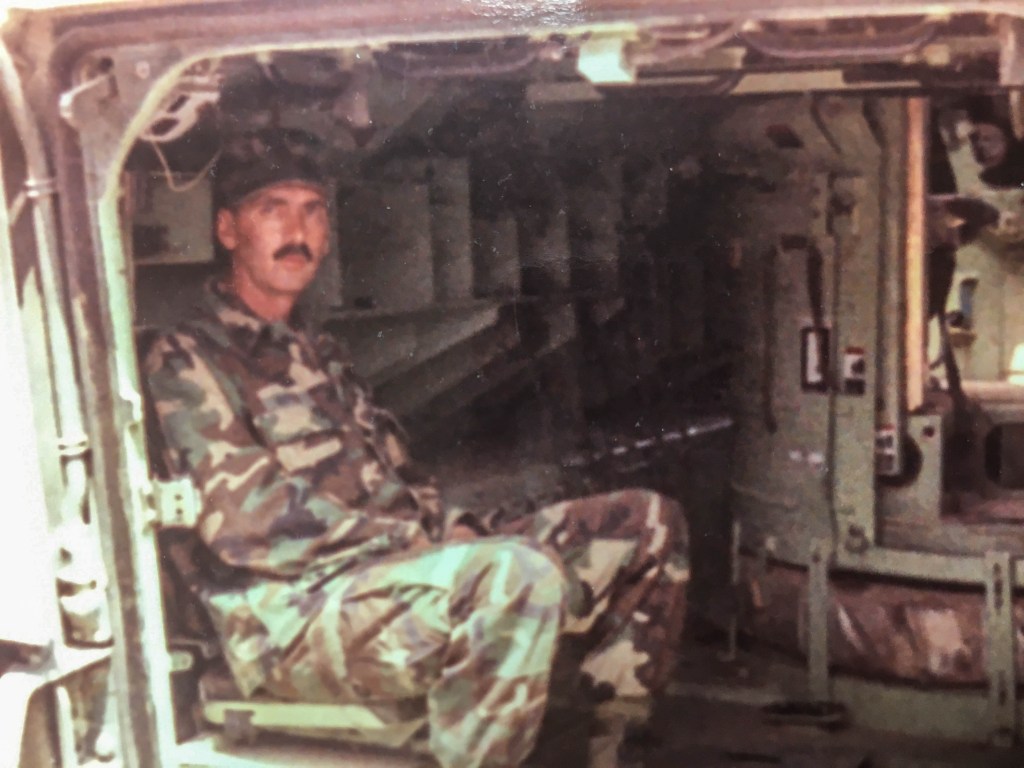 Steve Rogers of Greenville thinks that the desire to defend one’s country is an innate characteristic. Even though the Vietnam War was beginning to wind down as Rogers approached his senior year of high school, he and his classmates still feared that they would be drafted and sent to war. Nevertheless, Rogers had a yearning to be involved with the effort to keep the nation safe.

Rogers graduated high school in 1970 and became a member of the Alabama National Guard immediately after. His joining of the guard may have prevented him from being sent to Vietnam, but it left a void that would take a second round with the national guard to fill.

During his first six years in the guard, Rogers simultaneously worked at Greenville Cash and Carry. After leaving the guard for just a year, he also left the cash and carry and went on to work at Union Camp in Chapman for 10 years, becoming a supervisor before his career at the lumber mill ended.

As Rogers neared the end of his six year contract with the guard’s artillery unit out of Greenville, his activity with the unit became monotonous and he tired of Camp Shelby, MS and Fort Rucker, AL, as they were the only places he was sent for summer camp and his one weekend a month training.

During Roger’s one year hiatus from the national guard, some of his friends continued to mention that joining a transportation unit in either Ft. Deposit or Georgiana would broaden his military horizons and break the slightly drab routine he experienced with the artillery unit.

In 1977, Rogers joined on with the national guard for a second time with the transportation unit in Ft. Deposit while still working at Union Camp. In 1986, he left Union Camp and built four poultry houses, taking on huge debt to run the operation.

Rogers was activated and sent to Iraq for Operation Desert Storm in 1990. He had no one to run the farm during his deployment, so Rogers and his wife Linda elected to put their chicken farming on hold. Although no income from the chicken houses was coming in, the loan payments were still there.

The Rogers had just returned from a doctor’s visit where they learned they were expecting their second child, a girl that they would name Casey, when his deployment orders were issued. Although Rogers was not fond of leaving his pregnant wife and young son Jason, he knew he had an obligation to fill, an obligation that he somewhat felt should have been met in Vietnam.

Rogers made it back from Iraq in time to attend what would be the last appointment for them as a family of three. Linda went on to deliver their baby girl that evening in 1991.

Rogers is content with the culmination of his military career. Although, without his one-year departure from the National Guard, he would have met his goal of serving for 20 years and avoided deployment to Iraq. Rogers now feels that he has paid his debt to his country and the instinctive need ingrained within him to serve the nation has been met.

Rogers experienced some burdensome acts overseas but chooses to remember the good times of brotherhood and the comic episodes (like when he accidentally brushed his teeth with Desitin instead of toothpaste during a night when no light was available).

He says that he knows there have been hard times in life and that bad memories from Iraq are in the back of his mind, but it is almost like the unpleasant events did not happen as he keeps focusing on the happy memories.

Rogers is satisfied with his military course, but is in no way boastful. He said that the small role he played in protecting this nation was something he did willingly because of the military men and women that came before him and lost more than he ever did.

Rogers is very thankful for the benefits he gained via his service. He learned many life lessons and gained friendships. His wife Linda was diagnosed with cancer in 2011 and still has to take some medications due to her diagnosis.  The healthcare benefits they are now eligible for provides them with a sense of relief, knowing they will not ever have to worry about medication or copays for either of them.

Worry is not something near the top of Roger’s list. He said that being a Christian is always number one. His faith has helped him through many trials, but he said that if you have the Lord, then nothing else matters.

The Rogers family owns and operates a large cattle farm just east of Greenville. Over the years, they have added a daughter-in-law to the family, Joy, a grandson, Caleb, and two granddaughters, Rosie and Rileigh.