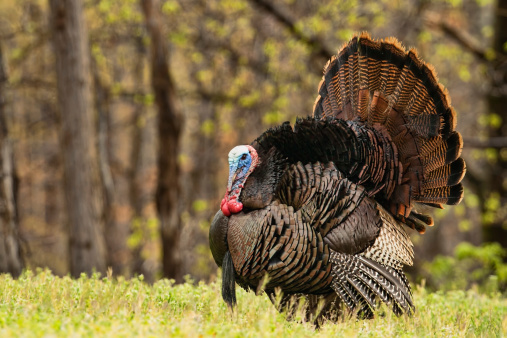 Trying to entice females and ward of other males, this Tom turkey is fully puffed out and his head engorged. Copy space to the left of bird in blurred forest.

By Haley Mitchell-Godwin
The Greenville American Legion Post 24, will be holding a turkey shoot this Saturday, Nov. 6, starting at 9 a.m. The event will take place at the Central Volunteer Fire Department on Halso Mill Road. The proceeds will go toward the group’s annual sponsoring of seven high school juniors’ attendance at Girls/Boys State at the University of Alabama.
Jerry Myers, a member of the Greenville American Legion, said the turkey shoot will provide fun for the entire family.
“We want everyone from Greenville and surrounding areas to come out. This isn’t just for men or boys. Many girls and women love to shoot, and we want them to attend. We will also have games and concessions for sale at the shoot and some great prizes,” Myers said.
Shotgun shells will be provided, but participants must use their own shotguns. There will be various age and gender categories as well as a category for Veterans only. A $5 donation will pay for one shooting chance.
Greenville is home to one of the original organizers of the American Legion. The group’s mission and vision statement are as follows:
To enhance the well-being of America’s veterans, their families, our military, and our communities by our devotion to mutual helpfulness. The American Legion’s vision statement is “The American Legion: Veterans Strengthening America.” The American Legion was chartered by Congress in 1919 as a patriotic veteran’s organization. Focusing on service to veterans, servicemembers and communities, the Legion evolved from a group of war-weary veterans of World War I into one of the most influential nonprofit groups in the United States. Membership swiftly grew to over 1 million, and local posts sprang up across the country. Today, membership stands at nearly 2 million in more than 13,000 posts worldwide. The posts are organized into 55 departments: one each for the 50 states, along with the District of Columbia, Puerto Rico, France, Mexico and the Philippines. Over the years, the Legion has influenced considerable social change in America, won hundreds of benefits for veterans and produced many important programs for children and youth.