Showtime at The Ritz Theater 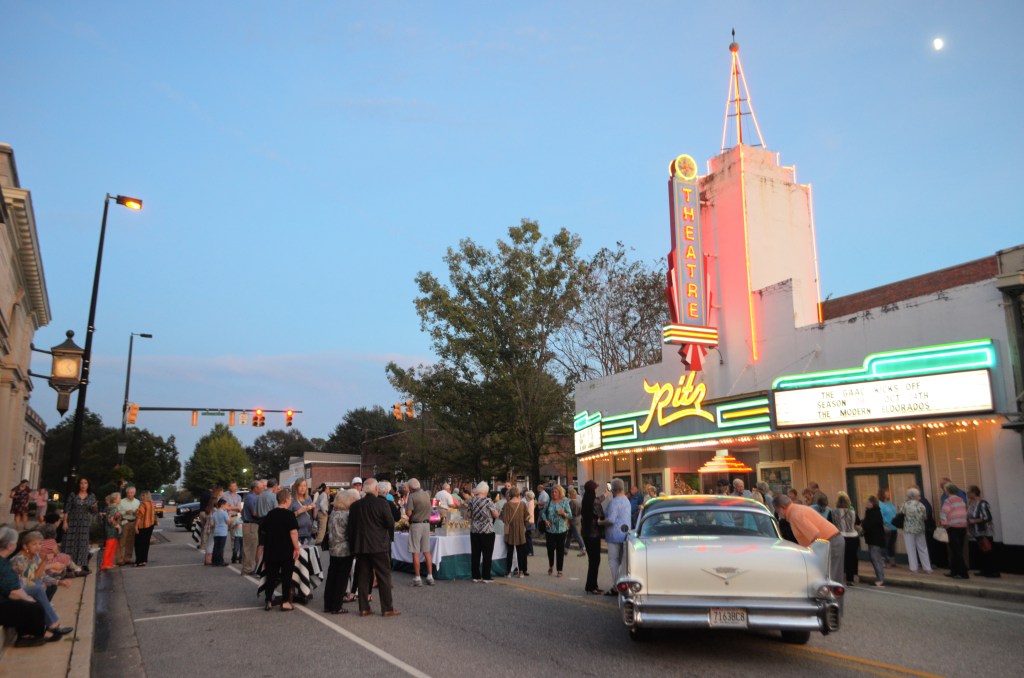 The Greenville Area Arts Council began season 39 Thursday night, Oct.14 with a pre-show party on Commerce Street in front of The Ritz theater. A concert by The Modern Eldorados followed.

Gretsch Lyles and The Modern Eldorados entertained the crowd with a lesson in authentic American honky-tonk. Lyles, who grew up in a family of musicians in rural Baldwin County, answered the call to follow in the footsteps of his heroes Marty Robbins, Hank Williams and Johnny Cash. 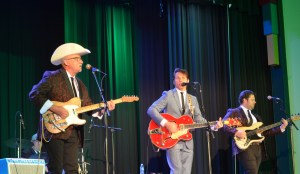 His group’s style and sound personify that of his idols. The night’s performance included the band’s rendition of Lonesome Fugitive originally recorded by Merle Haggard, Mind Your Own Business by Hank Williams Sr., You Never Can Tell written and first recorded by Chuck Berry, several other classic country tunes, along with some of the band’s original music-including Tennessee Tonight and a tribute song to a lost band member.

The pre-show party began at 5:30 p.m. in a section of street blocked off by the Greenville Police Department.

A bountiful array of food was eloquently presented for all to enjoy during the mingling hour and a vintage Cadillac, Eldorado enriched the laid-back atmosphere.

Nancy Idland, executive director of the Greenville Area Arts Council, was found amongst the crowd enjoying good conversation and delighting in the fruits of GAAC’s labors.

“Music is a joyous thing. It enriches our lives, and I am so glad to see such a great turnout. Our council member volunteers have worked hard to prepare and present the food. They are really passionate about the arts and are always happy to help,” Idland said.

“I really want to encourage everyone to come out and enjoy the shows. Having the opportunity to experience live music here in Greenville is something I want everyone to take advantage of. The only way a person can know what they are missing out on, and can build an appreciation for what we have here, is to come to a show. It is quaint. It is enjoyable and it is simply lovely.”

Fifth grader at Greenville Middle School, Camille Bozeman, has already cultivated an appreciation for theater and the arts. Bozeman wrote a note to Nancy Idland two weeks ago, asking if she could be an apprentice this year.

Bozeman expressed her desire to learn everything there is to know about theater and putting on a show at The Ritz. Nancy Idland eagerly agreed, began sharing her vast knowledge and put Bozeman to work with her first task, selling t-shirts.

“I have already sold about $800 worth of t-shirts. I am so excited to help raise funds for The Ritz and the GAAC and to learn all I can from Mrs. Idland. I love drama club and have been performing forever. I can’t wait to be in more performances here at The Ritz,” Bozeman said.

Performances that Bozeman has participated in at The Ritz include The Little Mermaid, and Junie B. Jones. During the summer she acted in a production of Moana in Baldwin County and is looking forward to appearing in Christmas at The Ritz this coming December. If acting does not become her career, she wants to be a lawyer one day.

Idland was very proud that Bozeman helped set up for the day and of her eagerness to learn. Bozeman is extremely intelligent and knows more about Hamilton the Musical than anyone, Idland said.

Wendy Jones of Greenville has been a season ticket holder for well over 10 years. She loves everything about The Ritz and said that it’s a very unique attraction for a small town.

“The allure to the theater begins with the beautiful art deco style and then continues throughout all aspects of the building, the shows and the atmosphere. I enjoy being near the same friends I have sat with for years. The Ritz exposes us to lots of culture and gives people living in Greenville, and other areas, something very enjoyable to do. I really love experiencing every performance that is put on here and am looking forward to the rest of the season and all of the specials that the locals perform in,” Jones said.

Those attending the affair hailed from a variety of areas, including a group of friends that pleasantly stumbled upon the event. Bill Dobney of North Carolina, Gene Lloyd of Florida along with Ron Michael and Randy Elsass of Ohio, were in town for a stop on the Robert Trent Jones Golf Trail and found themselves thoroughly enjoying The Ritz and what Greenville, Ala. has to offer.

“We read the great reviews on The Ala. Grill and decided to stop in for dinner. We didn’t realize the party or the concert was going on until we were leaving the restaurant. Someone pointed us in Nancy’s direction. She welcomed us and invited us to see the concert. Regrettably, we had a prior engagement but hope to return one day to see a show. I love meeting people from all over, and it is just amazing how friendly people in the south, in this area, really are,” Lloyd said.

Dobney really loved the architecture of the building, the atmosphere of the town, and the charm of the people. The group has put Greenville on their list of favorite spots.

Hugh Black of Nashville, TN, and formerly of Greenville, was in the area to attend his Alma Mater’s Homecoming festivities. Black recalls watching movies in the theater when he was a young child and as a teenager. He was pleased that the homecoming football game coincided with the show at The Ritz.

“I have a lot of fond memories associated with this theater. I distinctly remember watching Gone with the Wind. I made a few trips to the movies when I was small and when I became old enough to drive, I spent a lot of time here. My wife and I have tried to get tickets in the past during our trips home, but the shows have always been sold out. I am glad I can see the show today and the little reminder of days gone by is quite pleasant. This theater is a part of Greenville’s history, and I am proud to see it still being lovingly preserved,” said Black.

After the close of the pre-show party, Nancy Idland opened the season and the concert with a few words. She acknowledged the sadness and loss experienced by all. Idland recognized the obstacles that COVID has put in the way while giving hope for a joyful future enriched by music.

“The arts council recently had to say goodbye to someone that was very dear to us. We lost someone so special when Angie K. Long died. She was a true friend to the arts council and every community organization here in Greenville. She shared her talents so very generously through her lens, making us look good even on bad hair days. Through her pen our events seemed fabulous even if they were just OK. She did all she did for us with a heart and a love that is unmatched, and we will miss her greatly,” Island said.

The Season 39 lineup includes Shenandoah on Nov. 18, The Black Jacket Symphony bringing the sounds of Lynyrd Skynyrd’s Second Helping on January 13, 2022, and the final performance of the season will be the best of party oldies presented by Chevy Six on Feb. 17, 2022.

Season tickets and individual show passes can be purchased online at seeyouattheritz.com. Tickets for individual shows will be sold at the door on show nights if seating is available.