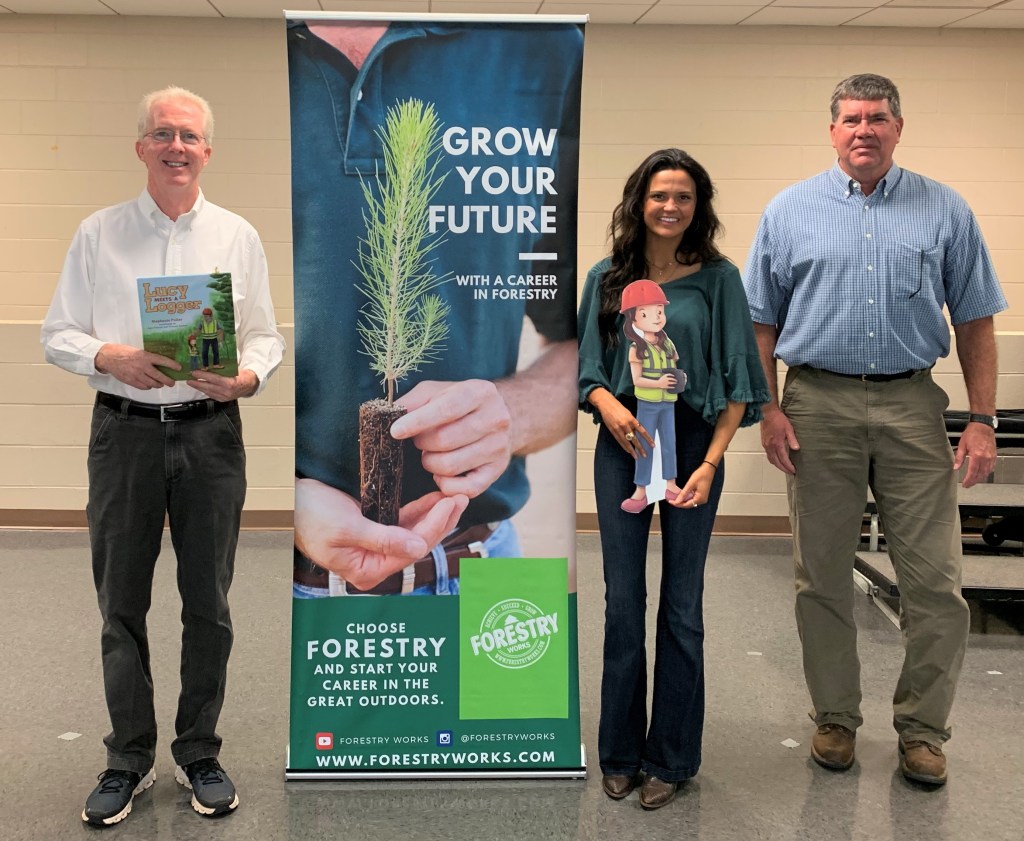 Due to his visit being part of the Alabama Forestry Association’s fall “Lucy Tour,” Sells read Lucy Meets A Logger to the first graders to educate them about the forestry industry. Forest industry leaders also educated students on the many daily used products that come from trees and the importance of the forestry industry to the people of Alabama.

Students had the opportunity to hear from Doug Scott, a forester for Ziebach & Webb Timber Co, about the many career opportunities the forestry industry offers as well.

According to Alabama Forestry Association Grassroots Coordinator Anna Morgan, the “Lucy Tour” idea came from discussing the best way to educate kids about the forestry industry.

“The Alabama Forestry Association wanted to do something that was both fun and educational while teaching kids about forestry,” Morgan said. “The author of the book, Stephanie Fuller, works at the Forestry Association, and we thought it would be a great idea to have someone from the local communities in Alabama come and read to the kids.”

Lucy Meets A Logger is based on Fuller’s childhood experiences growing up in a logging family. Fuller wrote the book to have a tool that she could take to schools to show the forestry industry in a positive way.

So far, the fall tour has had almost thirty stops since it began in March. Before coming to W.O Parmer, the tour made a stop in Lowndes County with Governor Kay Ivey reading to a small number of kids.

Morgan said that Butler County Executive Director for Economic Development David Hutchison had reached out to her to set up this stop on the tour.

“He made my job easier,” Morgan said about Hutchison. “By the time we had all gotten to the school, everything was set up and waiting for us to start.”

In addition to a book tour, The Alabama Forestry Association works with the Auburn South East Raptor Center to educate middle school students on the importance of timberland management and its impact on native wildlife.

In the future, the Alabama Forestry Association hopes to have more opportunities to teach children about the forestry industry.

“Ms. Fuller is currently in the process of writing another book that we think could be released sometime around the spring of 2022,” Morgan said. “That book will focus on educating kids about tree farms, which are another part of the forestry industry. We don’t know if we are going to do a book tour once it is released, but we are constantly looking into doing.”

Morgan said that everyone involved with the book tour has had a great time.

“The kids and the officials coming to read to them have had a lot of fun doing the book tour,” Morgan said. “And we’ve had fun having people come in and talk to kids about their jobs in the forestry industry. Speaking about all the great things related to forestry is something that we enjoy doing. From what we have seen so far, the tour has been very effective.”

At the end of their visit, the Alabama Forestry Association gifted each first-grade class a “Woods to Goods” box, donated by the Alabama Sustainable Forestry Initiative. These boxes contained a copy of Lucy Meets A Logger and educational tools for teachers to use to explain the significance of the forest industry.

If you would like to purchase a copy of Lucy Meets A Logger, visit lucymeetsalogger.com. All profits from the book will further the educational tools used for the forest products industry.