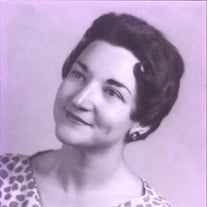 Anne was born in Greenville, Alabama, December 26, 1932, the daughter of John A. McCrory and Frances Adams. She graduated from Greenville High School in 1952 and then attended Judson College and Troy University. She worked off and on in insurance over the years.  She married Calvin Hopkins, an accountant for the State of Alabama, March 20, 1960.  She was a devoted member of Greenville First United Methodist Church, then Montgomery First UMC and Millbrook UMC.

Anne had polio as a child.  She overcame the obstacles and thrived, although she had post-polio effects later in life. She always told the story of her parents taking her to see the famous agricultural scientist, George Washington Carver, for treatment, who rubbed peanut oil on her polio-stricken leg.

Memorials can be made to First United Methodist Church, 3350 Edgewood Rd, Millbrook, AL 36054.