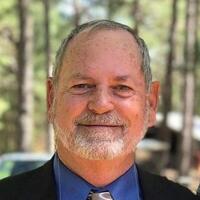 Jimmy H. Peavy, born February 27,1951 to Sarah Peavy and the late Harold W. Peavy in the farming community of Industry, Alabama.He and his brothers Billy and Jerrald grew up working on the family farm.

Jimmy  attended Industry School until he went to Georgiana High School where in the 12th grade began working part-time after school at Union Camp until graduation in 1969. He then started working there full until he was drafted to serve in the US Army.

Before deploying to serve in the Vietnam War, he married Belle Green, whom he met at Mt. Pleasant Baptist Church where they remained as lifelong members. Upon return from Vietnam Jimmy, Belle, and their children moved to Manhattan, Kansas, to finish out his Army service.

Jimmy began working with the former Southern Railway in 1976 as a crane operator for the engineering division. This job required him to work away from home during the week. A sacrifice he lovingly made for the betterment of his family for 35 years.

He was widely known as one of the best crane operators in the southeastern railroad division where he worked until retirement in 2011 from now Norfolk Southern Railway.

Jimmy was proud of his work building bridges in Alabama, Mississippi, and parts of Louisiana. His name is listed on a monument at the bridge over Lake Pontchartrain in recognition for his part in constructing the longest train bridge in the United States. He was particularly proud of this accomplishment because he worked alongside his son Joey, who was also, and remains, employed with Norfork Southern.

After retiring, he and Belle, enjoyed traveling with friends to various points of interest throughout the U.S. He began bowling again, gardening, doing backhoe work for neighbors, going to his grandchildren’s various school, community, and church events.

In recent years he showed true devotion, patience, and unwavering love to his wife of 50 years as her full time caretaker, after her diagnosis with Alzheimer’s.

After a brief, but difficult ,battle with Covid, he passed away with his family at his side.

We know without a doubt he stepped into Glory and heard “Well done thy good and faithful servant.”

His father Harold Peavy precedes him in death.