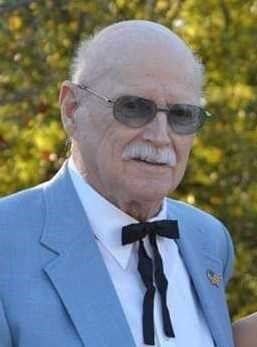 George Washington Wacha Jr, 88, of Georgiana, passed away in his home surrounded by family on Friday, August 13.

The funeral service is this afternoon in the chapel of Johnson Funeral Home.

His children, six grandchildren, a great-grandson, two sisters-in-law, a brother-in-law and numerous nieces, nephews, cousins and friends survive him.

After serving in the US Navy during the Korean War he married his wife and settled in Teaneck, NJ in “Frog Hollow” and became a career professional firefighter.

After retiring as a Firefighter Lieutenant in 1983 he moved his family to the Providence community of Georgiana, AL, and helped organize three rural fire departments: Shackleville, Starlington, and Providence-Mt. Pisgah Volunteer Fire Departments.

George also was active in the community, serving the Georgiana Kiwanis Club both as a member and former president. He was also a member of the Georgiana VFW Post.