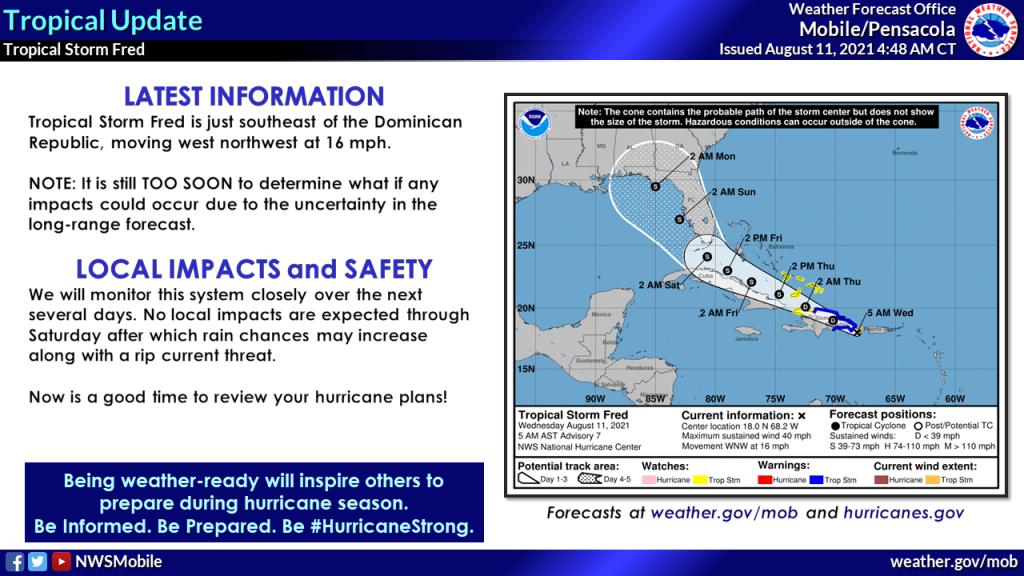 Tropical Storm Fred has changed very little since the last update and remains a weak tropical storm just southeast of the Dominican Republic.

Fred will move west-northwestward into the Florida Straits through Friday night, then turn northward while moving across the far eastern Gulf through Sunday.

So, what about coast Alabama and the westernmost Florida Panhandle?

Fred will interact with higher terrain as it moves near or over Hispaniola today. So, there will be fluctuations in intensity and one can expect that. Even after entering the Gulf of Mexico, as a storm or not, there is some discrepancy regarding how quickly it will re-curve to the north given the placement and timing of more predictable larger scale features that would help to steer it.

There is around a 1 in 10 change of Tropical Storm Force Winds (i.e., 39 mph) mainly over the coastal waters of the western Florida panhandle, including a small portion of the coast, and generally from 20-60 nm over the Alabama coastal waters.  Given the current forecast track, tropical storm force winds in this area could begin as early as late Saturday evening, but will most likely begin Sunday morning.  We encourage you also to pay particular attention to trends in track, intensity and also with regard to impacts as we move forward. We recommend to avoid latching onto any one particular forecast because there will likely be changes.