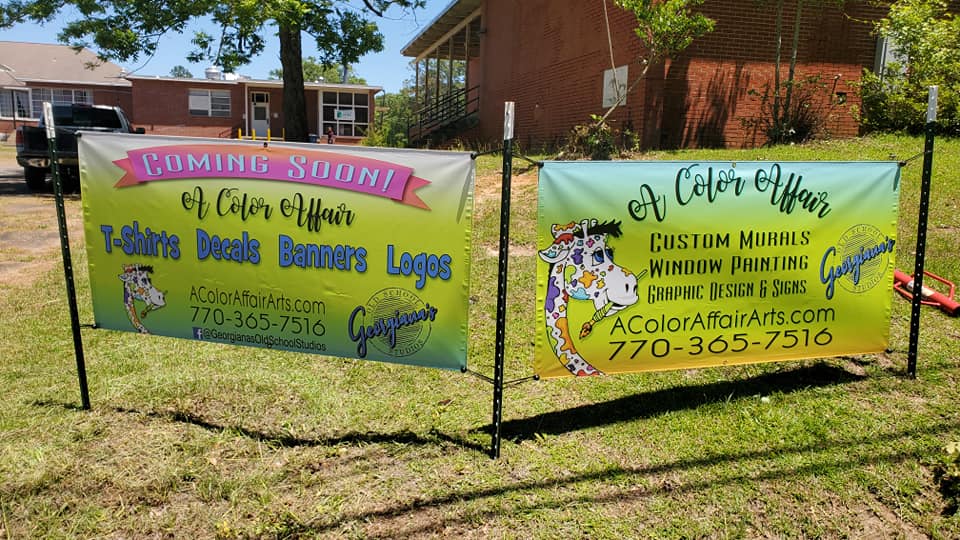 Another building on the old Georgiana High School campus is getting a new lease on life.

Michelle Black of a Color Affair Muralist is expanding her operations and plans to move into what will be known as Georgiana’s Old School Studios at North Miranda Avenue later this summer.

“For a while, I was able to make do with space available in my home,” Black, a Georgiana resident who travels across the region to do window painting, permanent murals and signage, said. “However, things are busy enough now that I have some project going on in practically every room. We have simply outgrown the house.”

In recent weeks, she and her husband Danny began looking for an existing building in the area that would provide the elbow room the busy artist needs.

“Mayor Franklin Betterton was a huge help to us. He mentioned the old high school and how a couple of the other buildings are being used now for things like nurses training and doctor’s offices,” Black said. “We took a look and decided this would be perfect.”

The 3,000 square foot structure formerly housed a total of six classrooms. Black already has specific plans for four of the rooms.“Right now, we are looking to transform four of the classrooms into an art studio, vinyl studio, paint studio and a workshop. We plan to offer t-shirts, banners, decals and logos—all types of graphic design. We’re still working out what we will do with the other two classrooms,” Black said.

While most classrooms have been cleared of furnishings following the school’s closure in 2008, a good general cleaning and re-painting of the spaces have been necessary.

“We had to clean the ceilings, wipe away dust and work on getting rid of the mustiness you are bound to get in a space that’s been closed up for 13 years . . . it’s been interesting to see how many people have stopped by to see what’s going on as we’ve worked in there. Lots of folks are sharing their memories of attending classes here,” Black said. “We are getting all the utility people in, and Greenville Glass has already measured some of the windows and doors needing replacement glass. It’s coming along.”

Even as the couple works to get Old School Studios ready, Black continues to work on several large-scale projects. She recently created and applied the new vinyl lettering and graphics to the newly painted train car located next to Hank Williams Park in time for the 2021 festival this weekend.

“With everything that’s going on, I am sure it’s going to be late summer before we officially open up Georgiana’s Old School Studios,” Black said.

She could use some help from the community, particularly former students and teachers at the old high school.

“What I really want to do is make copies of old photos from the days when the school was still open—pictures of the school itself, sports shots, kids on the playground, classroom pics—and then frame and display them on the walls of the studios,” Black said. “So, anyone out there who has some of these kinds of pictures who are willing to share them with us, please let me know.”

The artist and business owner believes in Butler County and in supporting her community.

“I am also volunteering at the ticket booth for the festival weekend, as I wanted to do something to help the town. That’s why I wanted to find a studio space in town, too—for convenience’s sake, yes, but also to help business growth here in Georgiana,” Black said.

“We are beyond excited about this new adventure. If you are on Facebook, please ‘like’ and ‘follow’ our new page, Georgiana’s Old School Studios, for plenty of photos and updates on our progress.”