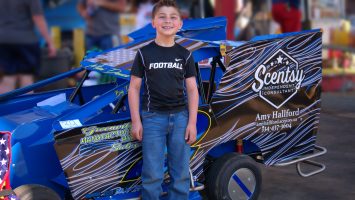 In many ways, Zachary Hallford is your typical eight-year-old boy. He loves animals, amusement parks, and playing ball.

Unlike most kids his age, he’s also the proud owner of his very own race car. That vehicle shared honors for “Most Unique Entry” at last weekend’s 2nd Annual Ronald Mount Chrome and Steel Show at F&S Tire in Greenville.

Zachary, a second-grader at Fort Dale Academy, loves the thrill of the dirt track just like his dad, Dougie, who has been racing for a decade now.

“My daddy, Allen Lucas, my cousin Shep Lucas and my uncle Dwight Lucas all raced and my cousin, Dale Lucas, a senior at McKenzie School, is racing now,” Amy Hallford said.

“I guess you could say my entire life has been filled with dirt track racing. Zachary attended his first race when he was only seven months old. He loves the people he meets at the races, cheering his favorites on every week, and the friendships he’s formed along the way. He’s also made great friends with other racers his age, and they learn a lot from each other.”

As soon as he was old enough to operate them, Zachary was tooling around on a dirt bike and a go-cart.

“He really knows how to handle those vehicles. That boy loves anything with tires . . . and he’s been wanting his own race car for at least two years,” Hallford said.

“This mama wasn’t quite ready for that.”

With rule changes in the Slingshot Class, however, the Hallfords decided it was time to make their son’s track dreams come true.

“We surprised Zachary with his own car on Christmas Eve 2020, a car we found in Florida that had only been raced twice before,” Hallford explained.

Zachary and his dad picked out a wrap style for his new ride, with Showtime Graphics creating and putting it on the car.

“Zachary wanted gloves like Dale Earnhardt, Jr, used to wear with the skeleton hands on them, so that’s what he got.”

Mom says Dougie has been teaching Zachary the rules of the road (or track, as the case may be), as well as how to do mechanical work on his car, and the meaning of all the flags used during the races.

“We even practice with the flags in the yard with his dirt bike,” Hallford said. “He knows exactly what to do when he gets on and exits the track.”

Another important lesson the Hallfords are trying to teach their young racer is good sportsmanship.

“That’s so important no matter what you do in life, and to learn that at an early age just puts you a step ahead,” Zachary’s mom said.

Earlier this year, the family’s newest driver practiced in his new blue racer for the first time at a track in Milton, Florida.

“I was a nervous wreck—and that was just a practice,” Hallford admitted.

But it’s all going to be OK, she says.

“You see, a racing family is like no other—some are blood, some are not, but they are family, no doubt—and an amazing support system,” Hallford said.

“Zachary loves racing and says he wants to race NASCAR when he grows up. This is his dream, and I want Zachary to always chase his dreams.”